The Psychology of Populism  explores the psychological reasons for the rise of populism, featuring contributions from leading international researchers in the fields of psychology and political science.

One of the editors of this new book, Joseph P. Forgas, was kind enough to spend some time answering some of the most pressing questions about the phenomenon of Populism and the challenges it forces liberal democracies to confront.

1. What inspired you to write the book?


Our inspiration for this book came from a deeply felt concern about the recent rise of populist movements both in liberal democracies, and in less developed nations, matched with our conviction that social psychology has a major contribution to make to explaining the rapid recent rise of tribalism all over the world. In my case especially, I have lived in totalitarian systems for part of my life, and so my concern about the survival of liberal democracy also has a deeply felt personal significance, as the following brief video should illustrate:

2. What would you like people to reflect on after reading The Psychology of Populism?

I think our main message is that liberal democracy is a fragile system that requires thoughtful, rational thinking and strict adherence to the fragile norms of democratic systems, including tolerance, free speech and adherence to a rules-based system. Unfortunately, there is extensive research in social psychology documenting that demagogic leaders can easily exploit the universal human evolutionary tendency to succumb to simplified, tribal thinking and intergroup hatred. The trend to populist thinking characterizes both of right, and the left of the political spectrum. Nationalism, racism, ethnocentrism and xenophobia are typical right-wing ideologies, but identity politics, woke-ism, cancel culture, language control and political correctness are equally dangerous strategies employed in the service of left-wing identitarian causes.

The common denominator is that instead of focusing on what binds us – the universal values of humanist individualism – these populist ideologies emphasize the primacy of various superimposed group identities, often drawing on Marxist theorizing that explicitly (but in my view, incorrectly) emphasizes the necessity and even inevitability of group conflict to achieve social justice and progress.


I think propaganda plays a very important role, if only because human beings, for evolutionary reasons, are very easily attracted to populist messages emphasizing the primacy of the groups they belong to as a means to constructing a positive identity. For some decades after WWII, we learnt the lesson that such messages, as used by Goebbels, Mussolini, Stalin and Mao, are simply unacceptable. Unfortunately, it seems that this lesson has now been forgotten, and scoundrels such as Orban in Hungary, Erdogan in Turkey and even Trump in the US can freely use such primitive identity-based propaganda to gain political legitimacy. And of course the internet gave a new unlimited platform to this kind of thinking that would not have reached so many people previously.

4. Should we be worried about the rise of populism?

I would say, definitely yes. We know from psychology that human nature is often characterized by less than rational thinking, a preference for simple explanations, and a powerful desire to belong to an admired group. Populists successfully exploit these tendencies. Human history also tells us that dislike between groups, often developing into hatred and ultimately violence and war has long been the norm in our past. The amazing success of Western civilization in creating the most prosperous, peaceful and tolerant system in all of human history is all too easily destroyed when our tribal instincts are awakened by populist appeals.

5. Where would you refer readers to learn more about populism and psychology?

I would certainly recommend our book as a good place to start. We cover such issues as the cognitive, emotional and motivational reasons for the power of populist appeals, and the human needs and values they exploit, as well as analyses of successful populist movements in countries such as Hungary and the USA. The role of propaganda techniques, the appeal of simplicity and certainty, the draw of moral superiority and charismatic leadership are also discussed. I think readers with an interest in this issue might also want to read in areas such as evolutionary social psychology, and history to get a broader perspective for the reasons for our evolutionary vulnerability to tribal propaganda.

Books by Steve Pinker, Yuval Harari, Jonathan Haidt, von Hippel, Robinson and Acemoglu and many others also speak to this issue. After all, populism has been with us for millenia… we have been here before, and must be very careful to avoid the same mistakes again.

Praise for the book:

"What more timely task for psychological science than to expose the roots and fruits of today’s growing tribalism (of both left and right) and the support for autocratic leaders. Kudos to this global team of scholars for revealing the emotions, the thinking, and the collectivist energy that fuel populism. A much-needed resource for interested students of psychology, sociology, and political science—and for political pundits and leaders."

"This outstanding and very timely book explores the psychological factors behind the recent rise of radical populist movements. Leading international scholars analyze the effects of motivational, emotional and cognitive factors in populist appeals both on the left and on the right, with often surprising results. Issues of identity, grievance, insecurity, nationalism, xenophobia, tribalism and uncertainty avoidance receive special consideration. This is must reading for anyone who cares about the world today, and especially for students, researchers and practitioners in the social and behavioral sciences."

Co-author of the ‘Power of Bad’, Professor of Psychology,

"Forgas, Crano and Fiedler have pulled together an amazing set of chapters from an international cast of interdisciplinary scholars to address a topic that could not be more timely and important to the survival of liberal democracies world-wide. The chapters yield thought-provoking analyses of what populists want, what its origins are, how it produces tribalism, and why it appeals to both the political right and left. Readers will achieve a comprehensive and essential understanding of a global movement that is affecting everyone’s lives."

The Psychology of Populism  is available now from routledge.com. 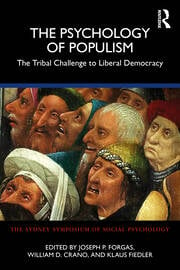