Editor of the new book Teaching Einsteinian Physics in Schools, David Blair has this to say on the importance of a 21st Century physics curriculum:

Recently I spoke to 650 school students aged from 5 to 11 to mark the start of National Science Week. I asked for a show of hands if they had heard of black holes. At least 80% of them raised their hands.

But where do we find black holes in the school curriculum? We don’t!

At a more mundane but important level, the modern understanding of heat as the jiggling of atoms, and light as a stream of photons are not in the primary school curriculum, despite the fact that today we can see atoms and measure their speeds, we can see photons arriving one at a time.

Earlier this year the most powerful known photon was detected…it had ten trillion times more energy than a visible light photon. But teachers can’t talk about it if no one knows what a photon is.

What students do know for certain is that science at school is about “old stuff” because of the snippets of modern science they get from the media.

This is the reason that we must modernize the school science curriculum. We must replace 19th century concepts with 21st century concepts, and teach everyone the modern language of physical reality. This needs to begin in primary school.

Our book is designed to spearhead this revolution in school science.

Einstein’s discoveries in 1905 marked the start of a conceptual revolution. In the space of one year he made three remarkable discoveries. He proved first that Brownian motion, discovered by Robert Brown in Albany  when he was studying the pollen of Australian plants, was caused by atoms jiggling and bouncing off the pollen. He proved that light comes as photons and finally he found that light speed was the speed limit of the universe.

Ten years later his masterwork was his theory of gravity that told us that spacetime is like an elastic fabric. Louis de Broglie’s capped it all in 1924 with his great unifying discovery that all matter and radiation have a combination of waviness and bulletiness (normally called wave particle duality). This marked the birth of quantum physics.

For a century we have had this new paradigm: space and time like a stretchy fabric, matter changing the shape of space, and everything having two complementary qualities of waviness and bulletiness.

Ten years ago Mario Zadnik and I did some trials in a primary school. We made one astonishing discovery: the children were not astonished at all. We taught them about the waviness and bulletiness of photons, that you can measure the shape of space by doing geometry, and that time is different on top of a mountain. They took it all in their stride.

The best thing about those early trials and many more trials ever since, was that the children loved it. What they love is the activity based learning, and they love toys, so we use toys wherever possible. We use Nerf gun bullets as toy photons, pingpong balls as toy electrons and toy molecules made of magnetic tennis balls and pingpong balls. Sometimes we use toy cars as photons and use objects with increasing mass to increase their bulletiness (i.e. momentum). These toys allow experiments such as the dissociation of toy molecules by toy UV photons to explain why UV light can break our DNA and cause skin cancer, and why radio (and 5G!) photons are safe because they have much less bulletiness.

Kids always want explanation. Why, why, why? Einsteinian physics has enormous explanatory power whether at the level of quantum interactions or gravity. All students at all levels love to play with our spacetime simulators, studying how photon trajectories are deflected when space is curved, how gravity gradient forces tear up comets, how orbits precess, how stars and planets are formed and how galaxies get their shapes.

Climate change is driven by the absorption of infrared photons by CO2 molecules. Toy molecules held together by magnets allow students to explore the different ways a CO2 molecule vibrates compared with oxygen molecules - which explains why tiny amounts of CO2 have such enormous effects.

We combine our toys with consumer products such as solar panels, electric drills, LED lights and laser pointers. Laser pointers allow the waviness of light to be explored in a whole range of interference experiments. Solar panels demonstrate bulletiness, photons ejecting electrons, and are ideal for almost all electricity and energy studies at primary and middle school. A solar panel can drive a 12V electric drill which can be used for lifting, and for creating frictional heat.  Behind it all is Einstein’s Nobel prize-winning discovery that photons kick electrons, and so create the stream of electrons we call an electric current.

Our special effort has been in making the program easy for teachers without science backgrounds. Our activity-first approach solves this problem. Each activity has a concept behind it that is revealed by the activity. Each activity is easy and fun, and once completed, the concept, whether it is gravity or the photoelectric effect, becomes obvious. From this the idea that the shape of space can be measured with geometry is easily assimilated, even by teachers with no science background.

Our book Teaching Einsteinian Physics in Schools is based on international experience by more than 20 authors who are all committed to modernizing science education. It is presented at the level needed for school teachers, including some material that would be used in senior high school.

The majority of students will not specialise in physics. The goal of Einstein-First is that all students should finish the compulsory years of science with the basic knowledge and vocabulary of our best understanding of the physical universe. We believe that improving student attitudes by teaching relevant science will help to extinguish anti-science movements, and most of all will encourage more students into STEM careers.

Teaching Einsteinian Physics in Schools is available now from routledge.com.

More information on the book is available in our  Q&A with Magdalena Kersting and David Blair .

"Science doesn’t stop moving; our curriculum must also keep up with the times. This book will help teachers convey to our children the fundamental principles of the machinery of our universe."

"More than 75 years after his death, Albert Einstein remains a colossal figure in the scientific world, renowned not only for his scientific theories – which underpin almost every aspect of our modern understanding of the cosmos – but also for the way in which he thought about physics. Einstein combined mathematical rigour and logical clarity with a creativity and imagination that helped to revolutionise our concepts of space and time and the very nature of reality. This outstanding textbook takes the reader on a comprehensive exploration of Einstein’s scientific legacy – arguing convincingly that both what Einstein discovered about physics, and how he made those discoveries, should be an essential ingredient of any modern science education."

- Martin Hendry, Professor of Gravitational Astrophysics and Cosmology and Head of the School of Physics and Astronomy at the University of Glasgow

"There is a pressing need to modernise the school curriculum. It is over 100 years since Einstein published his theory of relativity, but it hardly features in school curricula. Perhaps it is because the concepts are complex and we are still finding ways to better teach classical ideas, but unless the curriculum can be modernised there is a danger that it will become outdated and disconnected from the complex ideas that students will encounter at university. Teaching Einsteinian Physics in Schools is an important book. The authors are experts in both relativity physics and education and this book brings together the evidence of their own experiences and researches collected over many years. I recommend this book to anyone aspiring to bring Einsteinian physics into the classroom." 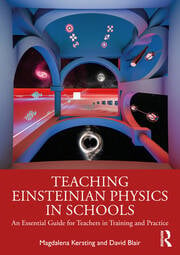 Q&A with the Editors

Find our Q&A with Magdalena Kersting and David Blair here .