This article was cited from Historical Wig Styling: Victorian to the Present, by Allison Lowery.

Our continued fascination with the Victorians is understandable when you consider what a period of huge change it was for England. The industrial revolution was taking place, as well as drastic social and political change, not to mention the railways meaning that citizens could travel widely for the first time. This fascination has meant that the Victorian era is still a popular setting for historical dramas and plays.

This article demonstrates how to create a popular Victorian hairstyle for women and men, including creating hairstyle on a wig, which can then be used by professional costume designers for theatre or television performances. One of the benefits of using wigs in theatre or television is that the wig can be fully styled beforehand, saving the actors and hairstylists a lot of time on the night of the production or during filming.

Women’s Hairstyles in the Victorian Era

For women of this era, the hair around their ears was a focal point. Tight curls (known as sausage curls) would often cover the ears, or else hair might be braided and looped around the ears, as shown in the images below. The hair was parted in the centre of the head, often with a second parting from ear to ear, separating the front of the hair from the back.

Men’s Hairstyles in the Victorian Era

In the Victorian era men’s hair became longer on top, so that it could be formed into curls or waves. These hairstyles often had a deep side part, and the top of these hairstyles was often quite flat to the head, becoming fuller over the ears, as depicted above.

1.  Begin with a long-haired wig, around 16 inches and mostly all the same length, although it’s fine if the hair is slightly shorter around the face. Part the hair in the middle and pin blocking tape a few inches from the part, in order to keep the hair flat and smooth at the top.

2. On each side of the head, set 3 sausage curls as the top row, rolling towards the face. Then below them for the second row, set one sausage curl rolling away from the face. The ideal size for these rollers can be seen below.

3. Pull most of the remaining hair into a ponytail at the top of the head, then take the hair from the ponytail and put it into three larger rollers.

4. Take the remaining loose hair at the nape of the neck and tie it into a low ponytail, before rolling it into four of the larger rollers. You have now finished setting the wig, which should look similar to the below.

6. Once you’ve waited the correct amount of time, you can remove the rollers from the wig, beginning at the nape of the neck. Take extra care with those at the side of the face to ensure they remain as tight ringlets.

7. Then take the curls from the top ponytail at the back of the head and loop them around your fingers to form four looped curls. Pin two of these curls in place with bobby pins. Then take the second two curls and bring them on top of the first two. Arrange them with your fingers until you’re happy with how they look, before pinning them in place.

9. Still using the hair at the back of the head, brush each loose section of hair around your finger to form another curl. Pin these curls in place and incorporate them into the bun.

10. Finally, you can move your attention to the sausage curls at the front of the hairstyle. Spray these with hairspray before wrapping each one around a dowel rod. Then slide the dowel rode out of the curl. And you’re finished! 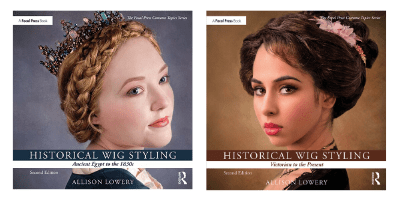 These guides will allow you to create beautiful, historically accurate hairstyles for theatrical productions and events, including detailed instructions and full-colour images to make the learning process as simple as possible.

Take your pick from a variety of Costume, Hair and Makeup books, where you'll find the latest releases.

Interested in wider aspects of the theatre? Explore our range books on Theatre and Performance studies. 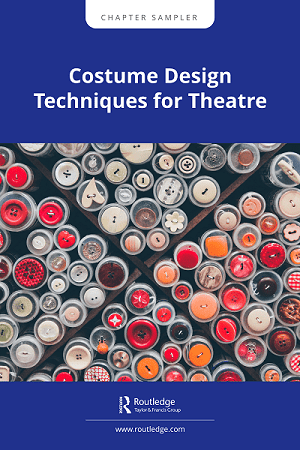