Written by Marjorie Hershey, Author of Party Politics in America.

The Republican Party has been on a roller coaster. Just six years ago, many Republican Party leaders laughed off Donald Trump’s candidacy for president, and none endorsed him. Not till Trump began winning about 40 percent of the Republican primary vote in 2016, in competition with 16 other candidates, were Republican leaders drawn to his bandwagon. Four years later, the Trump takeover of the party was complete. During his presidency, his approval rating among Republicans averaged 87 percent, compared with a minuscule 6 percent among Democrats – the biggest partisan gap in presidential approval ever recorded. Even after he lost reelection in 2020, Trump’s charisma continued to grip Republican voters. The problem with charismatic leaders, however, is that just as you can rise with them, you also fall with them. Trump’s administration responded slowly and unevenly to the coronavirus pandemic in 2020; the president made light of the danger and shifted the responsibility to the under-resourced states. Trump’s turbulent political style, well-suited to fanning the culture wars, was less effective in the face of 250,000 pre-election pandemic deaths.

Then, Trump took the unprecedented step of refusing to accept his loss. Most elected Republicans followed him down that path, insisting the election was tainted by voter fraud, even as court after court threw out Trump’s claims for lack of evidence. If you were a Republican leader or elected official, you faced a tough choice. Should you continue to back Donald Trump? On one hand, Trump’s approval ratings were dropping in 2021. Many Republican officeholders, who had long criticized him in private, found it hard to keep insisting that he had won reelection. Some notable Republicans – House minority whip Liz Cheney, for example – publicly divorced themselves from Trump. Still, most Republican identifiers backed Trump passionately, even refusing to believe that he’d lost. One West Virginia woman insisted, “There’s millions and millions of Trump votes that were just thrown out.” Another declared himself ready to go to war for Trump. The former president vowed to take revenge on any Republicans who denounced him. His PAC raised $60 million in just four months following his loss, to help him carry out his threats. A crack had opened in the Republican Party as anti-Trump Republicans considered forming a third party. Trump toyed publicly with leaving the GOP and forming his own Patriot Party.

How likely is a third party to form?

Political Science research provides an answer. As you’ll see in chapter 2 of Party Politics in America, minor parties have formed throughout U.S. history. Many ran candidates in 2020, including the Prohibitionists and the Libertarians, but since 1860, no minor party has become a major party, despite the great variety of interests and ethnicities in the U.S. Why are we the rare democracy that maintains just two major parties? Here’s the most important reason: Unlike most other democracies, the U.S. uses election rules that protect a two-party system. We vote for one candidate for each office (single-member districts) and the candidate with the most votes (a plurality) wins. So only parties with a chance of winning the most votes (the plurality) will run a candidate for that seat. If the Prohibition Party never wins the most votes for an office, why should it spend scarce resources on running a candidate?

Other democracies use a different system. Let’s say your state gets ten representatives in the U.S. House, and every voter in the state can vote for all ten seats, not just one. If one party gets 60 percent of the total votes, it gets 60 percent of those ten House seats: six House members. That’s called proportional representation. Then, if a party can win even 10 percent of the state’s votes, it can elect one House member. That’s huge; now, a “third” party will have a voice in House deliberations. Another big reason why the U.S. has only two major parties is that state legislatures make the rules governing how a party or candidate gets on the ballot. State legislatures are composed almost entirely of Republicans and Democrats. Not surprisingly, they prefer to limit their competition, so they pass rules favoring the two major parties in getting ballot access. To run as a minor party candidate, you would have to get many times more signatures on a petition, under very restrictive rules, than your Democratic or Republican colleagues. So a viable third party is unlikely in 2024, for either Trumpists or anti-Trumpists. Besides, Trump supporters don’t need to form a third party, they are completing their capture of the Republican Party. The American major parties are weak enough organizationally, and responsive enough to grassroots activists, that they have long been vulnerable to capture, both from inside and outside.

Decades ago, the national Democratic Party was strongly influenced by its conservative, white southern supporters. It downplayed racial issues for that reason. Then, as civil rights activists gained strength in the party, those conservative white southerners moved slowly into the Republican Party. Under their leadership, the GOP changed its stance to oppose abortion and civil rights legislation. More recently, Republicans have lost key support in the suburbs but gained strength among White voters without a college degree. This shift has also changed the parties’ stands on issues. Donald Trump is now the face of the GOP. He holds the hearts of most Republican primary voters and his party has big institutional advantages. Gerrymandering by state legislatures elected in the Republican wave of 2010, and not much reduced by 2020, means that Republican House candidates can win a majority of that chamber with less than a majority of the national popular vote. That would be less likely under a proportional representation system.

Another environmental force is less friendly to the Trump Party. Within the next few decades, White, non-Latino Americans, now the mainstay of GOP support, are predicted to become a minority of the U.S. population. The party’s long-term prospects depend on its ability to adapt to this major demographic change. The GOP presidential vote increased by 8-9 percent in 2020 among Latino Americans, particularly among those worried about crime and socialism. The Trump Party could expand that vote by raising concerns about crime. Many Republican state legislatures are passing bills to limit voting rights by expanding photo ID requirements and reducing mail-in voting (although the research is not clear that reducing voter turnout inevitably helps Republicans win), but these gains may not last if the Trump Party continues to signal its sympathy for white supremacist groups.

Perhaps the greatest challenge for American democracy will be the rise of beliefs in the Trump Party that question the desirability of a democratic system. A recent survey of Republican identifiers found that a majority or substantial plurality agreed with antidemocratic statements such as, “The traditional American way of life is disappearing so fast that we may have to use force to save it.”

The capture of the GOP by Trump should keep us a two-party system – as long as the reshaped Republican Party can adjust to a rapidly-changing electorate. 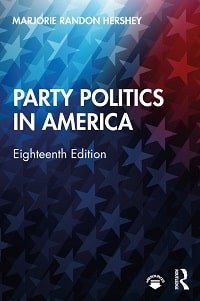 The eighteenth edition of Party Politics in America continues the comprehensive and authoritative coverage of political parties for which it is known while expanding and updating the treatment of key related topics including interest groups and elections. Marjorie Hershey builds on the book’s three-pronged coverage of party organization, party in the electorate, and party in government and integrates contemporary examples—such as campaign finance reform, party polarization, and social media—to bring to life the fascinating story of how parties shape our political system. 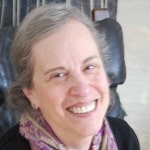 Marjorie Hershey has been a professor of Political Science at Indiana University since the beginning of time. Her primary teaching and research interest centers on U.S. political parties; her widely-used Party Politics in America text is now in its 18th edition (2021). She also teaches, writes, and speaks about media coverage of politics, elections, and political campaigns. She is an award-winning teacher and an active participant in community social service groups.