This infographic provides students with a brief introduction to the field of Sociolinguistics.

Is sociolinguistics about how individuals use language? How people use language differently in different regions? Or how a nation decides what languages will be recognised in courts or education? Yes, to all! Sociolinguists conduct research into all of these topics and more.

When linguists talk about accents, they are referring only to how speakers pronounce words, whereas they use dialect to refer to distinctive features at the level of pronunciation and sentence structure.

The variation in how speakers of different ages in a single community use language provides a useful synchronic measure through which we can draw inferences about the directions (if not the speed) of diachronic change.

Refers to a language that hasn’t been standardised and has no official status e.g. regional speech. It also refers to the most colloquial variety in a person’s verbal repertoire, the variety used in the home and with close friends. Vernacular often also refers to the use of swear words.

Before the First World War the town of Oberwart was part of Hungary, and most of the townspeople used Hungarian. The town had been surrounded by German-speaking villages for over 400 years, so many people also knew German. At the end of the war, Oberwart became part of Austria, and German became the official language. Hungarian was banned in schools and this marked the beginning of a period of language shift.

An Introduction to Sociolinguistics, 5th Edition 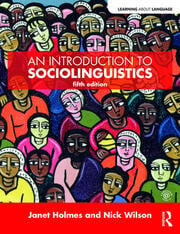 In this best-selling introductory textbook, Janet Holmes and Nick Wilson examine the role of language in a variety of social contexts, considering both how language works and how it can be used to signal and interpret various aspects of social identity. Divided into three sections, this book explains basic sociolinguistic concepts in the light of classic approaches as well as introducing more recent research. 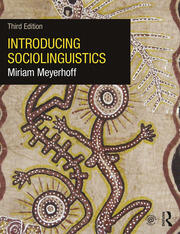 This third edition of Miriam Meyerhoff’s highly successful textbook provides a solid, up-to-date appreciation of the interdisciplinary nature of the field and covers foundation issues, recent advances and current debates. It presents familiar or classic data in new ways, and supplements the familiar with fresh examples from a wide range of languages and social settings.