From the Military and Naval History Series...Peter Padfield on Tide of Empires

"The other distinguishing mark of merchant power has been freedom, since both trade and consultative government require the widest dissemination of information and free expression of opinion." - Peter Padfield 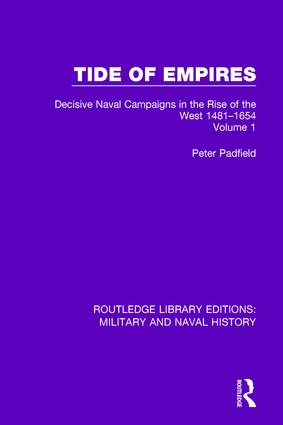 I remember discussing what was to become Tide of Empires with Norman Franklin of Routledge. It seems aeons ago, but I remember it well; it was over an enjoyable lunch at the Reform Club – enjoyable I'm sure because in those days I tucked into anything. Now I am a vegan and never so well catered for. At that stage the work was to be Decisive Naval Campaigns from the fifteenth century to the present day in three volumes. I had been led to this after writing biographies of two great gunnery officers and a history of naval gunnery, which had shown me that western civilisation was built not on the comforting virtues taught us at school, but on the trinity of God, gun and advanced sailing ship.

I had also written a history of the Anglo-German naval arms race leading up to the First World War; this had taught me that Germany, under the preposterous Kaiser Wilhelm II, had simply wanted what Britain had - world power. As, much earlier, Sir Francis Drake and Elizabeth I of England had only wanted what Spain had – silver. So I added the green goddess: God, gun, sailing ship and jealousy. I recall Norman Franklin's enthusiasm for the project matching my own.

So I developed the theme that the rise of the West to global dominance was the result of the decisive naval campaigns with which a few sea powers such as Portugal, Spain, the Netherlands, Great Britain, and eventually the United States had encompassed and imposed their will on the world. The naval campaigns were not in themselves sufficient; it was wealth from monopolistic sea trades that was both lure and motor of the system.

There is a distinction between true 'sea powers' - the seventeenth century Netherlands and Great Britain as prime examples - which could devote all their energies to the accumulation of wealth by sea largely immune to land attack, and 'territorial powers' which grew a navy: these, in crisis were diverted from naval affairs by threats to or opportunities for expansion from their land borders. So the sea powers prevailed. And so Great Britain in the nineteenth century garnered the mightiest, most civilising - though certainly not stainless - empire in history. It was won on the back of trading wealth, market control and financial integrity, all self-generating products of sea power.

What is still to be grasped by historians, let alone the intelligent public, is that being a true sea power alters the fundamental nature of a country and its government. Merchants, grown wealthy from trade bring the pressure of money to bear on hereditary monarchies and landowning aristocracies; and sooner or later merchant values prevail in government. Chief of these are dispersed power and open, consultative rule since concentrated power and arbitrary rule by elites are unresponsive to the needs of trade and fatal to sound finance.

The other distinguishing mark of merchant power has been freedom, since both trade and consultative government require the widest dissemination of information and free expression of opinion; thus the basic freedoms of trade spread through all areas of life, tending to break down social hierarchies and the grip of received ideas while creating more open, mobile, and enterprising cultures. Liberty has always been the pride of powers enjoying naval supremacy.

Territorial powers have provided a mirror image: their most fundamental drives have been to preserve internal unity and protect and extend their borders. They have always developed top-down, authoritarian governments supported by land-holding warrior elites and professional bureaucracies which have shown incomprehension for the needs of trade and sound finance.

So, where are we now? The United States is the supreme sea power playing the traditional role of true sea power upholding freedom and democracy, China the territorial rival poised, perhaps, to challenge; but readers of these volumes may also recognise the European Union as the latest manifestation of continental territorial power, rigid from the top down and inevitably doomed.

Yet the game must change. Now that countries with huge and growing populations have dedicated themselves to economic growth in the image of the Western sea traders, it is evident the system is unsustainable: our earth cannot support it; we are already, perhaps at the tipping point. What our leaders can do about it is unclear; their first step, surely, is to recognise it.

And veganism? Well, that is simply a small personal attempt to show some respect for other species caught up in the ruthless merchant power game.