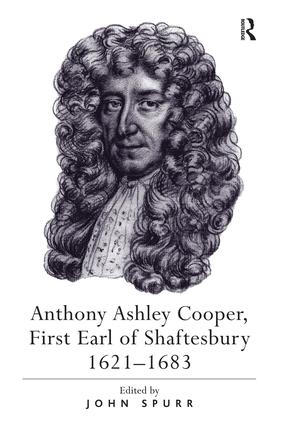 Anthony Ashley Cooper, First Earl of Shaftesbury, was a giant on the English political scene of the later seventeenth century. Despite taking up arms against the king in the Civil War, and his active participation in the republican governments of the 1650s, Shaftesbury managed to retain a leading role in public affairs following the Restoration of Charles II, being raised to the peerage and holding several major offices. Following his dismissal from government in 1673 he then became de facto leader of the opposition faction and champion of the Protestant cause, before finally fleeing the country in 1681 following charges of high treason. In order to understand fully such a complex and controversial figure, this volume draws upon the specialised knowledge of nine leading scholars to investigate Shaftesbury's life and reputation. As well as re-evaluating the well-known episodes in which he was involved - his early republican sympathies, the Cabal, the Popish Plot and the politics of party faction - other less familiar themes are also explored. These include his involvement with the expansion of England's overseas colonies, his relationship with John Locke, his connections with Scotland and Ireland and his high profile public reputation. Each chapter has been especially commissioned to give an insight into a different facet of his career, whilst simultaneously adding to an overall evaluation of the man, his actions and beliefs. As such, this book presents a unique and coherent picture of Shaftesbury that draws upon the very latest interdisciplinary research, and will no doubt stimulate further work on the most intriguing politician of his generation.

'This is an exciting and valuable collection of new viewpoints on one of the most controversial and enigmatic of Stuart politicians. The contributors are chosen from among the best scholars currently expert in the period, and between them, they cover the whole of Shaftesbury's career and each aspect of his activities and preoccupations. The results represent interventions in a number of different debates, and some promise to settle those discussions for good.' Ronald Hutton, University of Bristol, UK 'A collection of essays that befits the stature of the Earl of Shaftesbury.' Mark Kishlansky, Harvard University, USA 'Spurr’s Anthony Ashley Cooper is a great book about a very important British figure… I warmly recommend it not only to early modern British historians but to all early modern European historians as well.' Sixteenth Century Journal 'This volume provides a valuable introduction as it helps orient an unfamiliar student into the larger historiographical issues and arguments of the last four decades. It is also a useful refresher to those who are already familiar… Shaftesbury’s life, and this version of it, has provoked new interest, which will lead to fruitful new avenues of inquiry into seventeenth-century British political life.' The Historian 'This collection is in fact a veritable treasure trove… if I have been made to revisit some hazy thoughts from a long abandoned project, it is because of just how stimulating this collection is - precisely that, full of insights that set the reader off, mind buzzing to think through their implications. We are much closer now to penetrating the silences with which this most public of men concealed his private thoughts.' John Morrill in Britain and the World

Dr John Spurr is Professor of History and Head of the College of Arts and Humanities at Swansea University. He has written extensively on seventeenth-century Britain and has made particular studies of its religion, culture and language. In time stolen from his managerial responsibilities, he is working on a variety of topics from the high politics of Charles II’s reign to a comprehensive account of the role of swearing in our history.