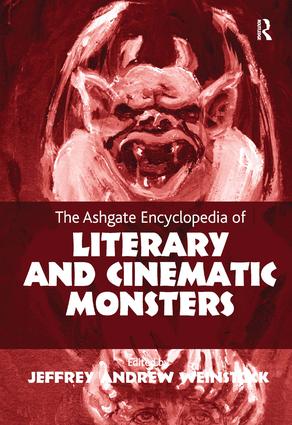 The Ashgate Encyclopedia of Literary and Cinematic Monsters

From vampires and demons to ghosts and zombies, interest in monsters in literature, film, and popular culture has never been stronger. This concise Encyclopedia provides scholars and students with a comprehensive and authoritative A-Z of monsters throughout the ages. It is the first major reference book on monsters for the scholarly market. Over 200 entries written by experts in the field are accompanied by an overview introduction by the editor. Generic entries such as 'ghost' and 'vampire' are cross-listed with important specific manifestations of that monster. In addition to monsters appearing in English-language literature and film, the Encyclopedia also includes significant monsters in Spanish, French, Italian, German, Russian, Indian, Chinese, Japanese, African and Middle Eastern traditions. Alphabetically organized, the entries each feature suggestions for further reading. The Ashgate Encyclopedia of Literary and Cinematic Monsters is an invaluable resource for all students and scholars and an essential addition to library reference shelves.

'… approximately 200 entries of note. These comprise the most common and significant monsters to be found in the literature, cinema, and pop culture of English-speaking regions. Entries include the usual suspects ("Vampire,""Frankenstein's Monster") and monsters envisioned by genre authors ("Lovecraft, Monsters in"). … This is a useful … starting point for research. Summing Up: Recommended' Choice ’It is a significant achievement to compile such a monster volume and to adequately reflect this fact while providing uniformly high expertise on the field of mythology, religion, literature and film around the world. […]The Ashgate Encyclopedia of Literary and Cinematic Monsters is the best reference book covering our beloved genre to come out in the last five or six years and any serious-minded scholar should have it close at hand.’ Rue Morgue Magazine ’…if you thought monsters were a minor byway of literature and the cinema, then think again. This extraordinary mammoth volume reveals just how old the concept of the monstrous in story-telling is, and how deeply it has become embedded in our literary and visual heritage. …a vivid and compelling reminder of how widely monsters have stretched human imagination, how varied their forms, activities and purposes have been, and how they have been used to explore new notions of good versus evil, superstition, religion and society throughout centuries of story-telling.’ Newsletter of Children’s Book History Society '… there are ingenious links forged, as when Bernadette Bosky, writing on "bigfoot", plausibly suggests a lineage which stretches from the figure of Enkidu in the Epic of Gilgamesh and the "wodwos" of Sir Gawain and the Green Knight to Jerry Crew, the Californian logger who, in 1958, "connected some thefts and disturbances at the work site to unnaturally large footprints".' Times Literary Supplement 'The Encyclopedia's great strength is its range. Historically, the essays present a chronol

Jeffrey Andrew Weinstock is Professor of English and Graduate Program Coordinator at Central Michigan University. He has published widely on monsters and the monstrous and is the author or editor of fourteen books including The Vampire Film: Undead Cinema (2012), Scare Tactics: Supernatural Fiction by American Women (2008), Spectral America: Phantoms and the American Imagination (2004), and three volumes of the fiction of American horror author H.P. Lovecraft.