The Routledge Companion to the Philosophy of Race 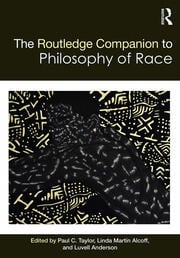 The Routledge Companion to the Philosophy of Race

For many decades, race and racism have been common areas of study in departments of sociology, history, political science, English, and anthropology. Much more recently, as the historical concept of race and racial categories have faced significant scientific and political challenges, philosophers have become more interested in these areas. This changing understanding of the ontology of race has invited inquiry from researchers in moral philosophy, metaphysics, epistemology, philosophy of science, philosophy of language, and aesthetics.

The Routledge Companion to Philosophy of Race

offers in one comprehensive volume newly written articles on race from the world’s leading analytic and continental philosophers. It is, however, accessible to a readership beyond philosophy as well, providing a cohesive reference for a wide student and academic readership. The Companion synthesizes current philosophical understandings of race, providing 37 chapters on the history of philosophy and race as well as how race might be investigated in the usual frameworks of contemporary philosophy. The volume concludes with a section on philosophical approaches to some topics with broad interest outside of philosophy, like colonialism, affirmative action, eugenics, immigration, race and disability, and post-racialism.

By clearly explaining and carefully organizing the leading current philosophical thinking on race, this timely collection will help define the subject and bring renewed understanding of race to students and researchers in the humanities, social science, and sciences.

Paul C. Taylor is Professor of Philosophy and African American Studies at the Pennsylvania State University, where he also serves as Associate Dean for Undergraduate Studies. He has written three books, including Black is Beautiful: A Philosophy of Black Aesthetics and On Obama, and is one of the founding co-editors of the journal Critical Philosophy of Race.

Linda Martín Alcoff is Professor of Philosophy at Hunter College and the CUNY Graduate Center, and Visiting Research Professor at Australian Catholic University. She was President of the American Philosophical Association, Eastern Division, for 2012-2013. Her books include The Future of Whiteness and Visible Identities: Race, Gender and the Self.

Luvell Anderson is Assistant Professor of Philosophy at the University of Memphis. Before coming to Memphis, he was Alain Locke Postdoctoral Fellow at Pennsylvania State University. His research lies principally in philosophy of language, philosophy of race, and aesthetics. He has published articles on the semantics of racial slurs and on racist humor.

"This important and timely volume addresses foundational questions concerning the impact of racial ideologies and practices on the development of Western philosophy. These interventions, profound in their ontological, epistemological and political implications, will be of keen interest to philosophers and other scholars working to better grasp the enduring legacies of racism."

"A timely and telling collection on the philosophy of race in the critical tradition. The volume grapples in the terms of both the European and counter-European philosophical traditions concerning the driving questions of race and racism today. This is a critically valuable study of philosophical canons and disciplinary practices regarding race. A volume that is as productive to think about as it is to teach."

Supporting the Sharing of Knowledge