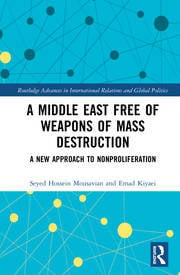 A Middle East Free of Weapons of Mass Destruction: A New Approach to Nonproliferation

The establishment of a Middle East zone free of nuclear weapons, a concept more recently broadened to cover all weapons of mass destruction (WMD), has been before the international community for decades. In this book, two experts from the region explore why the matter remains unresolved, and outline a comprehensive yet achievable roadmap to a Middle East free of WMD.

Weapons of mass destruction pose an existential threat to global peace and security. But nowhere is it more urgent to stem their spread than in the Middle East, a region fraught with mistrust and instability. Accounting for these geopolitical realities, including the ongoing talks to curb Iran’s nuclear program, the authors present a practical and innovative strategy to a Middle East free of weapons of mass destructions (WMD). They outline a phased approach toward disarmament in the region, prescribing confidence-building measures and verification tools to create trust among the region’s governments. Their vision also sees the realization of a WMD-free zone within a broader regional agenda for security and cooperation to advance socioeconomic and political progress.

This book will be of great interest to students and scholars of international relations, politics and security studies in the Middle East.

1. Regionalization of the Iran Accord

2. Multiple Initiatives to Make the Zone a Reality

3. A Phased Approach for the Zone

Seyed Hossein Mousavian is a Middle East security and nuclear policy specialist at the Program on Science and Global Security. He is a former diplomat who served as Iran’s ambassador to Germany (1990–1997), head of the Foreign Relations Committee of Iran’s National Security Council (1997–2005), spokesman for Iran in its nuclear negotiations with the international community (2003–2005), foreign policy advisor to the secretary of the Supreme National Security Council (2005–2007), vice president of the Center for Strategic Research for International Affairs (2005–2009), general director of foreign ministry for West Europe (1987–1990), chief of parliament administration (1984–1986), and editor-in-chief of the English-language international newspaper Tehran Times (1980–1990). Mousavian earned a PhD in international relations from the University of Kent, U.K.

Emad Kiyaei is a principal at the international consulting firm IGD Group, where he provides political, business, and civil society leaders with strategic advise in the intersection of political risk, disarmament, and diplomacy. He is also a director at the Middle East Treaty Organization (METO), which seeks to eradicate all weapons of mass destruction from the Middle East through innovative policy, advocacy, and educational programs.

He lectures and participates at conferences on the Middle East and disarmament issues at various academic and policy institutions. Formerly, he was a researcher for Princeton University’s Woodrow Wilson School of Public and International Affairs and an associate at Columbia University’s Center for International Conflict Resolution (CICR). Emad served as executive director of the American Iranian Council (AIC), an educational organization that focuses on U.S.–Iran relations. He holds a master’s of international affairs from Columbia University School of International and Public Affairs, USA.

“In a field dominated by Western voices, Mousavian and Kiyaei offer a refreshing perspective as Iranian scholars who understand both worlds. They offer practical ideas for how the Iran nuclear agreement can be a building block to the long-sought goal of a Middle East free of nuclear, chemical, and biological weapons. At a time when the nuclear agreement is under severe pressure, their prescription is another strong reason to preserve the accord.” —Mark Fitzpatrick, International Institute for Strategic Studies

"The book makes thoughtful, well-informed, original, balanced and timely contributions to the academic and policy debates on the challenges of reducing the risks from nuclear weapons and other weapons of mass destruction in the Middle East, focusing particularly in the Persian Gulf region. At a time when we are so close to war as a result of the U.S. confrontation with Iran—nominally over Iran’s nuclear program, but at least as much because of regional rivalries—it is an important reminder that there are more creative and positive ways to deal with the situation." —Frank von Hippel, Princeton University, USA

“The dynamics that produce calls for making the Middle East a zone free of weapons of mass destruction are not going away. Neither are the obstacles to creating such a zone. Mousavian and Kiyaei make a fresh and constructive case for why Middle Eastern states and others should more energetically begin efforts to build such a zone and how it could be designed and verified.” —George Perkovich, Ken Oliver and Angela Nomellini Chair and vice president for studies, Carnegie Endowment for International Peace

“For over 30 years, the international community has struggled over the goal of freeing the Middle East from weapons of mass destruction. This effort found new impetus in December 2018 when the United Nations agreed to hold an annual conference to develop and conclude a legally binding treaty for such a zone. In this timely and necessary contribution, Mousavian and Kiyaei chart a detailed and compelling path for what such a treaty could include and how it could be achieved.” —Zia Mian, Princeton University, USA