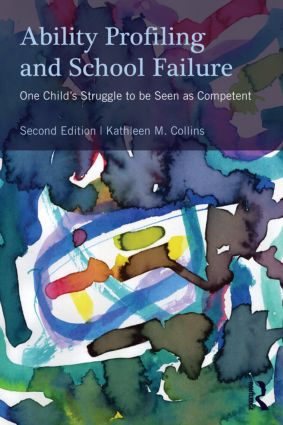 One Child's Struggle to be Seen as Competent, 2nd Edition

Ability Profiling and School Failure, Second Edition explores the social and contextual forces that shape the appearance of academic ability and disability and how these forces influence the perception of academic underachievement of minority students. At the book’s core is the powerful case study of a competent fifth grader named Jay, an African American boy growing up in a predominantly white, rural community, who was excluded from participating in science and literacy discourses within his classroom community.

In this new edition, researcher and teacher-educator Kathleen Collins situates the story of Jay’s struggle to be seen as competent within current scholarly conversations about the contextualized nature of dis/ability. In particular, she connects her work to recent research into the overrepresentation of minority students in special education, exploring the roles of situated literacies, classroom interactions, and social stereotypes in determining how some students come to be identified as "disabled." Ability Profiling and School Failure, Second Edition comprises a thorough investigation into the socially constructed nature of ability, identity, and achievement, illustrating the role of educational and social exclusion in positioning students within particular identities.

Preface Acknowledgements Introduction Chapter 1: Sociocultural Perspectives on dis/Ability and Positioning Chapter 2 The boy who had something to say Chapter 3

“He’s what I would call out there.” Chapter 4 “He was immediate. He was like immediate.” Chapter 5 “Where’s the evidence?” Chapter 6 “Jay just amazes me during this, he really does.” Chapter 7 “It will be very, very difficult for him to learn how to function in the class.” Chapter 8 “It’s like a burst, a burst of fire.” Chapter 9 “You got to hear this!” Chapter 10 “So who wrote it?” Chapter 11 “Jay, we gotta find you a group.”

Chapter 12 “I’m the boy who likes bugs.” Chapter 13 “Do you think I’m proper?” Chapter 14 “This ain’t easy!” Chapter 15 “Church is not a game!” Chapter 16 “I think that’s why we became very good friends.” Chapter 17 "If you stick out, you get squashed:" Ability profiling as response to difference Epilogue Appendix Approaches to Inquiry, Analysis and Representation

KATHLEEN M. COLLINS is an Assistant Professor of Language, Culture and Society and Co-Director of the Center for Disability Studies at Pennsylvania State University, University Park, USA. Her program of research aims to identify and interrupt deficit discourses surrounding children who are positioned as struggling with traditional school literacies. Kathleen is the recipient of the 2012 Ellen Brantlinger Junior Scholar Award for outstanding work within Disability Studies in Education.