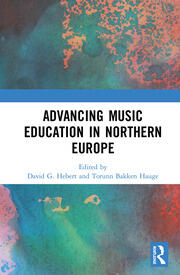 tells the story of a unique organization that has contributed in profound ways to the professional development of music teachers in the Nordic and Baltic nations. At the same time, the book offers reflections on how music education and approaches to the training of music teachers have changed across recent decades, a period of significant innovations. In a time where international partnerships appear to be threatened by a recent resurgence in protectionism and nationalism, this book also more generally demonstrates the value of formalized international cooperation in the sphere of higher education. The setting for the discussion, Northern Europe, is a region arguably of great importance to music education for a number of reasons, seen, for instance, in Norway’s ranking as the “happiest nation on earth”, the well-known success of Finland’s schools in international-comparative measures of student achievement, how Sweden has grappled with its recent experience as “Europe’s top recipient of asylum seekers per capita”, and Estonia’s national identity as a country born from a “Singing Revolution”, to name but a few examples. The contributors chronicle how the Nordic Network for Music Education (NNME) was founded and developed, document its impact, and demonstrate how the eight nations involved in this network – Norway, Iceland, Denmark, Sweden, Finland, Estonia, Latvia, and Lithuania – are making unique contributions of global significance to the field of music education.

David G. Hebert is a professor of music with Western Norway University of Applied Sciences, and in 2018 he became the manager of NNME. He is also a Professor II in Sweden in the Malmo Academy of Music (Lund University), and a Hanban Visiting Scholar in the Central Conservatory, Beijing, China. A widely published and cited researcher, he has also held positions with universities in the USA, Finland, Japan, China, Russia, Brazil, and New Zealand, and has directed research projects on six continents. Dr. Hebert is a frequent keynote speaker for conferences, and an editorial board member with such scholarly journals as Arts Education Policy Review and Music Education Research. His writings appear in over 30 different professional journals, and his books – as author, editor, or co-editor – include Wind Bands and Cultural Identity in Japanese Schools, Theory and Method in Historical Ethnomusicology, Patriotism in Nationalism in Music Education, International Perspectives on Translation, Education and Innovation in Japanese and Korean Societies, and Music Glocalization: Heritage and Innovation in a Digital Age. He has also published chapters in Oxford Handbook of Music Education, Routledge Research Companion to Popular Music Education, Sociology and Music Education, and Multicultural Perspectives in Music Education (vols. 1 and 2), and with William Coppola he is now co-authoring World Music Pedagogy: Music in Higher Education (forthcoming, Routledge).

is a professor of music education with Western Norway University of Applied Sciences, where she has taught for more than four decades. She is a founder and managing coordinator of the NNME, which has government funding for cooperative projects across all Nordic and Baltic countries, and celebrated its 20-year history in 2017. Since 1990, she has also managed the Nordplus-funded Teacher Education Network, which supports interdisciplinary arts projects in teacher education. A Nordic pioneer in the field of rhythmic music pedagogy, she is a producer of the video Rytmisk musikkpedagogikk i grundskolen (1999), first author of the book Rytmisk musikkpedagogikk i grundskolen (2000), and executive producer of the pedagogical CD Kotokaka rytmisk musikkpedagogikk (2002). She has also published research articles in English in such journals as Signum Temporis, International Journal of Education and the Arts, and a chapter in the book Musikk – Mulighetenes fag (2007). Additionally, she is a singer in a professional early music vocal quartet.