with Nicholas B. DiCarlo 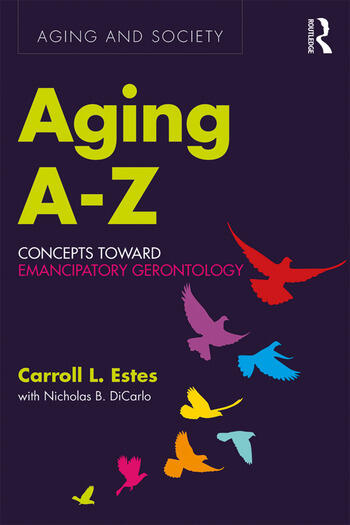 This provocative, intellectually charged treatise serves as a concise introduction to emancipatory gerontology, examining multiple dimensions of persistent and hotly debated topics around aging, the life course, the roles of power, politics and partisanship, culture, economics, and communications. Critical perspectives are presented as definitions for reader understanding, with links to concepts of identity, knowledge construction, social networks, social movements, and inequalities. With todayâ€™s intensifying concentration of wealth and corporatization, precarity is the fate for growing numbers of the worldâ€™s population. Intersectionality as an analytic concept offers a new appreciation of how social advantage and disadvantage accumulate, and how constructions of race, ethnicity, class, ability, and gender influence aging.

The bookâ€™s entries offer a bibliographic compendium, crediting the salience of early pioneering theorists and locating these within the cutting-edge of research (social, behavioral, policy, and geneâ€“environment sciences) that currently advances our understandings of human development, trauma, and resilience. Accompanying these foundations are theories of resistance for advancing human rights and the dignity of marginalized populations.

Carroll L. Estes is Professor Emerita of Sociology at the University of California, San Francisco (UCSF) where she founded the Institute for Health & Aging and chaired the Department of Social and Behavioral Sciences in the School of Nursing. Dr Estes is a member of the National Academy of Medicine and past President of three national organizations in aging: The Gerontological Society of America (GSA), the American Society on Aging and the Academy for Gerontology in Higher Education (AGHE). Credited as a founding scholar of the "political economy of aging" and "critical gerontology," Estes has Distinguished Scholar Awards from the American Sociological Association, Pacific Sociological Association., American Public Health Association, American Society on Aging, GSA, and AGHE. Receiving UCSFâ€™s highest honor, the UCSF Medal, Estesâ€™ awards for public service and action include Sociologists for Women in Society, Justice in Aging, National Organization of Women, Gray Panthers, and honorary Fellowship in the American Academy of Nursing.

, LCSW, writes about aging and social policy at the Institute for Health and Aging, UCSF. He has degrees in Media Studies and Film (B.A.s) from Vassar College and received his Masters of Social Work at Hunter College, specializing in global social work. Writing with Carroll Estes, his critical gerontological work has grown to reflect the ways in which the psychic and social are invariably bound. Nicholas has a private psychotherapy practice in Oakland where he brings this lens on aging, inequality, and generational trauma.

Monumental in scope, painstaking in detail, penetrating in depth and really accessible in style, this is the book to refer to for anyone interested in what aging means for society, and how much more it could mean if radically new policies were introduced by governments. Written with an enthralling vibrancy and heartfelt dedication to critical analysis, Estes and DiCarlo have performed a near miraculous feat in crafting the essential source for both newcomers to the ageing field and more experienced hands. Congratulations to them both. I could not recommend this book more strongly.
Alan Walker, Professor of Social Policy & Social Gerontology, University of Sheffield (UK)

The authors provide an unusual and welcomed project to infuse critical sociology and political economy to the study of gerontology. The encyclopedic entries are well written (and fun) to read. Highly creative, refreshing, and compelling.ă€€
Teresa Ghilarducci, New School for Social Research, and coauthor of Rescuing Retirement: A Plan to Guarantee Retirement Security for All Americans

Whatever depth of knowledge and expertise one already possesses, and whatever perspective one brings to the study and understanding of aging, it can be guaranteed that every reader will find much that is new and provocative in Aging A-Z. For scholars, policymakers and others interested in the future possibilities of age and aging, this bookâ€™s breadth and the extensive range of concepts is both challenging and inspiring.
Dale Dannefer, Selah Chamberlain Professor of Sociology, Case Western Reserve University