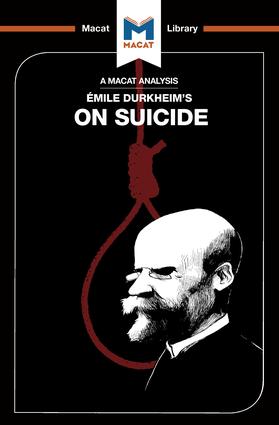 An Analysis of Emile Durkheim's On Suicide

Emile Durkheim’s 1897 On Suicide is widely recognized as one of the foundational classic texts of sociology. It is also one that shows the degree to which strong interpretative skills can often provide the bedrock for high-level analysis.

Durkheim's aim was to analyse the nature of suicide in the context of society itself – examining it not just as an individual decision, but one in which different social factors played important roles. In order to do this, it was vital that he both define and classify suicide into subtypes – kinds of suicide with different causal factors at play. From his research, Durkheim identifed four broad types of suicide: egoistic (from a sense of not-belonging), altruistic (from a sense that group goals far outweigh individual well-being), anomic (from lack of moral or social direction), and fatalistic (in response to excessive discipline or oppression). These definitions opened the way for Durkheim to pursue a close social analysis examining how each type related to different social contexts.

While his study is in certain ways dated, it remains classic precisely because it helped define the methodology of sociology itself – in which interpretative skills remain central.

Who was Émile Durkheim?

What does On Suicide Say?

Why does On Suicide Matter?

Robert Easthope holds an MSc in race and postcolonial studies from the London School of Economics.