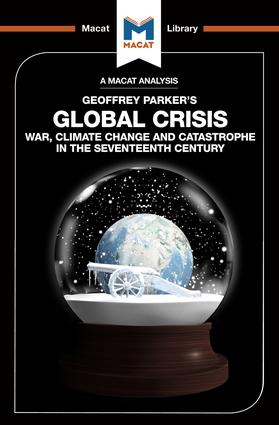 Few historians can claim to have undertaken historical analysis on as grand a scale as Geoffrey Parker in his 2013 work Global Crisis: War, Climate Change and Catastrophe in the Seventeenth Century. It is a doorstop of a book that surveys the ‘general crisis of the 17th century,’ shows that it was experienced practically throughout the world, and was not merely a European phenomenon, and links it to the impact of climate change in the form of the advent of a cold period known as the ‘Little Ice Age.’

Parker’s triumph is made possible by the deployment of formidable critical thinking skills – reasoning, to construct an engaging overall argument from very disparate material, and analysis, to re-examine and understand the plethora of complex secondary sources on which his book is built. In critical thinking, analysis is all about understanding the features and structures of argument: how given reasons lead to conclusions, and what kinds of implicit reasons and assumptions are being used. Historical analysis applies the same skills to the fabric of history, asking how given chains of events occur, how different reasons and factors interact, and so on.

Parker, though, takes things further than most in his quest to understand the meaning of a century’s-worth of turbulence spread across the whole globe. Beginning by breaking down the evidence for significant climatic cooling in the 17th-century (due to decreased solar activity), he moves on to detailed study of the effects the cooling had on societies and regimes across the world. From this detailed spadework, he constructs a persuasive argument that accounts for the different ways in which the effects of climate change played out across the century – an argument with profound implications for a future likely to see serious climate change of its own.

Who is Geoffrey Parker?

What does Global Crisis: War, Climate Change and Catastrophe in the Seventeenth Century Say?

Why does Global Crisis: War, Climate Change and Catastrophe in the Seventeenth Century Matter?

Ian Jackson is a PhD student in the Politics, Philosophy and Religion Department at Lancaster University. He is interested in the role new media plays in the dissemination of ideas.