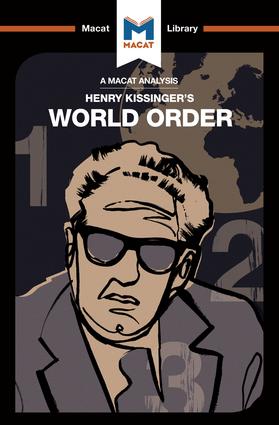 Reflections on the Character of Nations and the Course of History, 1st Edition

Henry Kissinger’s 2014 book World Order: Reflections on the Character of Nations and the Course of History not only offers a summary of thinking developed throughout a long and highly influential career–it is also an intervention in international relations theory by one of the most famous statesmen of the twentieth century. Kissinger initially trained as a university professor before becoming Secretary of State to President Richard Nixon in 1973 – a position in which he both won the Nobel Peace Prize and was accused of war crimes by protesters against American military actions in Vietnam.

While a controversial figure, Kissinger is widely agreed to have a unique level of practical and theoretical expertise in politics and international relations – and World Order is the culmination of a lifetime’s experience of work in those fields. The product of a master of the critical thinking skill of interpretation, World Order takes on the challenge of defining the worldviews at play in global politics today. Clarifying precisely what is meant by the different notions of ‘order’ imagined by nations across the world, as Kissinger does, highlights the challenges of world politics, and sharpens the focus on efforts to make surmounting these divisions possible. While Kissinger’s own reputation will likely remain equivocal, there is no doubting the interpretative skills he displays in this engaging and illuminating text.

Who was Henry Kissinger?

What does World Order: Reflections on the Character of Nations and the Course of History Say?

Why does World Order: Reflections on the Character of Nations and the Course of History Matter?

Dr Bryan Gibson holds a PhD in International History from the London School of Economics (LSE) and was a post-doctoral research fellow at the LSE’s Centre for Diplomacy and Strategy and an instructor on Middle Eastern politics at both the LSE’s Department of International History and the University of East Anglia’s Department of Political, Social and International Studies (PSI). He is currently on the faculty of Johns Hopkins University and is the author of Sold Out? US Foreign Policy, Iraq, the Kurds and the Cold War (Palgrave Macmillan, 2015).