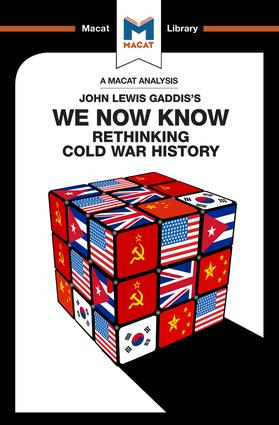 An Analysis of John Lewis Gaddis's We Now Know

John Lewis Gaddis had written four previous books on the Cold War by the time he published We Now Know – so the main thrust of his new work was not so much to present new arguments as to re-examine old ones in the light of new evidence that began emerging from behind the Iron Curtain after 1990. In this respect, We Now Know can be seen as an important exercise in evaluation; Gaddis not only undertook to reassess his own positions – arguing that this was the only intellectually honest course open to him in such changing circumstances – but also took the opportunity to address criticisms of his early works, not least by post-revisionist historians.

The straightforwardness and flexibility that Gaddis exhibited in consequence enhanced his book's authority. He also deployed interpretative skills to help him revise his methodology and reinterpret key historical arguments, integrating new, comparative histories of the Cold War era into his broader argument.

Who was John Lewis Gaddis?

What does We Now Know: Rethinking Cold War History Say?

Why does We Now Know: Rethinking Cold War History Matter?