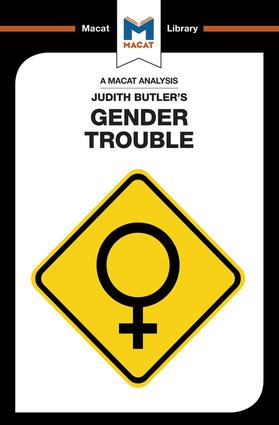 Judith Butler's Gender Trouble is a perfect example of creative thinking. The book redefines feminism's struggle against patriarchy as part of a much broader issue: the damaging effects of all our assumptions about gender and identity.

Looking at the factionalism of contemporary (1980s) feminism, Butler saw a movement split by identity politics. Riven by arguments over what it meant to be a women, over sexuality, and over class and race, feminism was falling prey to internal problems of identity, and was failing to move towards broader solidarity with other liberation movements such as LGBT.

Butler turned these issues on their head by questioning the basis that supposedly fundamental and fixed identities such as 'masculine/feminine' or 'straight/gay' actually have. Tracing these binary definitions back to the binary nature of human anatomy ('male/female'), she argues that there is no necessary link between our anatomies and our identities. Subjecting a wide range of evidence from philosophy, cultural theory, anthropology, psychology and anthropology to a renewed search for meaning, Butler shows both that sex (biology) and gender (identity) are separate, and that even biological sex is not simplistically either/or male/female. Separating our biology from identity then allows her to argue that, while categories such as 'masculine/feminine/straight/gay' are real, they are not necessary; rather, they are the product of society's assumptions, and the constant reproduction of those assumptions by everyone around us. That opens up some small hope for change: a hope that – 25 years after Gender Trouble's publication – is having a huge impact on societies and politics across the world.

Who is Judith Butler?

What does Gender Trouble Say?

Why does Gender Trouble Matter?