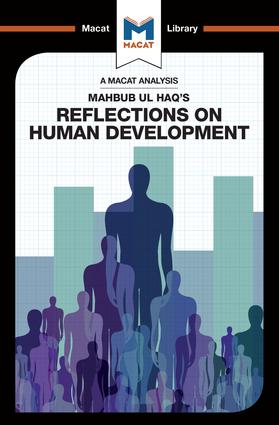 An Analysis of Mahbub ul Haq's Reflections on Human Development

What is the ultimate goal of any human society? There have been many answers to this question. But by producing a series of notably well-structured arguments, economist Mahbub ul Haq’s Reflections on Human Development persuaded readers that the goal should be defined quite simply as the requirement that each society improve the lives of its citizens.

If this is the agreed aim, Haq continues, then economic development should be designed to support human development. His well-structured reasoning helped development economists recalibrate much of what had previously been regarded as self-evident; that economic productivity was the main barometer of social well being. The work had a profound effect, and Haq’s thinking helped produce a new understanding of what ‘development’ actually meant.

Haq conscientiously mapped out arguments and counter-arguments to persuade readers that development did not simply mean an increase in productivity, but rather an increase in human development – the capability of people to live the lives they want to. By bringing the abstract back to the concrete, Haq reevaluated the neoliberal reasoning that suggested economic development necessarily benefitted everybody. And, by virtue of his strong command of reasoning, Haq showed how economic development provided no guarantees that rich people would spend money on improving health, education or other human development outcomes for the poor.

Who is Riley Quinn?

What does Reflections on Human Development Say?

Why does Reflections on Human Development Matter?