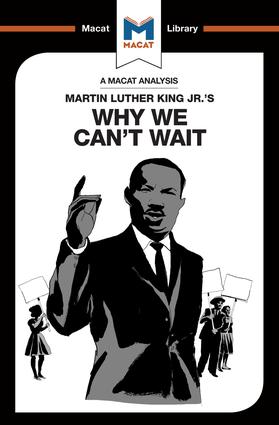 An Analysis of Martin Luther King Jr.'s Why We Can't Wait

Martin Luther King’s policy of non-violent protest in the struggle for civil rights in the United States during the second half of the twentieth century led to fundamental shifts in American government policy relating to segregation, and a cultural shift in the treatment of African Americans. King’s 1964 book Why We Can’t Wait creates strong, well-structured arguments as to why he and his followers chose to wage a nonviolent struggle in the fight to advance freedom and equality for black people following ‘three hundred years of humiliation, abuse, and deprivation.’

The author highlights a number of reasons why African Americans must demand their civil rights, including frustration at the lack of political will to tackle racism and inequality. Freedoms gained by African nations after years of colonial rule, as well as the US trumpeting its own values of freedom and equality in an ideological war with the Soviet Union, also played their part. King dealt with the counter-argument that civil rights for blacks would be detrimental to whites in America by explaining that racism is a disease that deeply penetrates both the white and the black psyche. His reasoning dictated that the brave act of nonviolent mass protest would provoke the kind of thinking that would eventually eliminate racism, and give birth to equality for all of ‘God’s children.’

Who was Martin Luther King?

What does Why We Can't Wait Say?

Why does Why We Can't Wait Matter?