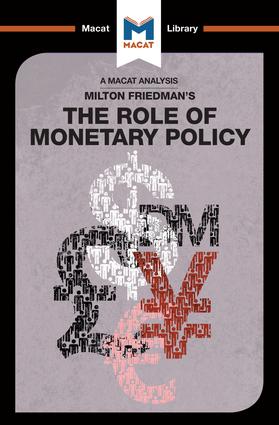 An Analysis of Milton Friedman's The Role of Monetary Policy

Milton Friedman was one of the most influential economists of all time – and his ideas had a huge impact on the economic policies of governments across the world.

A key theorist of capitalism and its relationship to democratic freedoms, Friedman remains one of the most cited authorities in both academic economics and government economic policy. His work remains striking not just for its brilliant grasp of economic laws and realities, but also for its consistent application of high-level evaluation and reasoning skills to produce arguments that can convince experts and laypeople alike.

Friedman’s 1968 essay ‘The Role of Monetary Policy’ is a key example of how Friedman’s critical thinking skills helped to cement his influence and reputation. The paper addressed the question of how a government’s monetary policy affects the economy – from employment levels to inflation and so on. At its heart lies an evaluation and critique of the most widely accepted conception of monetary policy at the time – the ‘Phillips Curve’ – which argued that increased inflation leads naturally to increased employment. Systematically noting the flaws and weaknesses of the Phillips Curve theory, Friedman showed why this is not, in fact, the case. He then drew up a systematic alternative argument for what governmental monetary policy could and should aim to do.

Though economists now consider Friedman’s ideas to have considerable limitations, ‘The Role of Monetary Policy’ remains a masterclass in evaluating and countering faulty arguments.

Who was Milton Friedman?

Nick Broten was educated at the California Institute of Technology and the London School of Economics. He is doing postgraduate work at the Pardee RAND Graduate School and works as an assistant policy analyst at RAND. His current policy interests include designing distribution methods for end-of-life care, closing labour market skill gaps, and understanding biases in risk-taking by venture capitalists.

John Collins is a senior analyst at Mesirow Financial.