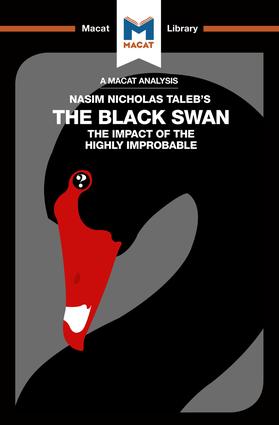 An Analysis of Nassim Nicholas Taleb's The Black Swan

The Impact of the Highly Improbable, 1st Edition

One of the primary qualities of good creative thinking is an intellectual freedom to think outside of the box. Good creative thinkers resist orthodox ideas, take new lines of enquiry, and generally come at problems from the kinds of angles almost no one else could. And, what is more, when the ideas of creative thinkers are convincing, they can reshape an entire topic, and change the orthodoxy for good.

Nassim Nicholas Taleb’s 2007 bestseller The Black Swan: The Impact of the Highly Improbable is precisely such a book: an entertaining, polemical, creative attack on how people in general, and economic experts in particular view the possibility of catastrophic events. Taleb writes with rare creative verve for someone who is also an expert in mathematics, finance, and epistemology (the philosophy of knowledge), and he martials all his skills to turn standard reasoning inside out. His central point is that far from being unimportant, extremely rare events are frequently the most important ones of all: it is highly improbable, but highly consequential occurrences – what he calls Black Swans – that have shaped history most.

As a result, Taleb concludes, improbability is not a reason to act as if a possible event does not matter. Rather, it should inspire the opposite reaction.

Who was Nassim Nicholas Taleb?

What does The Black Swan: the Impact of the Highly Improbable Say?

Why does The Black Swan: the Impact of the Highly Improbable Matter?

Dr Eric Lybeck is an historical sociologist. He holds a PhD in sociology from the University of Cambridge, and now lectures in sociology at the University of Exeter. He is a member of the editorial board for Current Perspectives in Social Theory and is the author of Sociological Amnesia, edited with Alex Law, a book that explores the forgotten legacies of once influential sociologists whose work has since been neglected by the discipline.