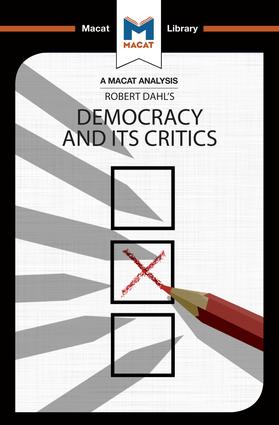 An Analysis of Robert A. Dahl's Democracy and its Critics

There are few better examples of analysis – the critical thinking skill of understanding how an argument is built – than Robert Dahl’s Democracy and its Critics. In this work, the American political theorist closely analyzes the democratic political system and then evaluates whether the arguments that are in favor of it are, in fact, rigorous. ¶Dahl sets out to describe democracy’s merits and problems, asking if it really is the worthwhile political system we believe it to be. Knowing that the idea of democracy is now almost universally popular, his detailed analysis leads him to look at a number of regimes that claim to be democratic but do not, in truth, practice democracy. But Dahl is not only interested in uncovering uncomfortable truths. He goes further and creates a set of standards by which we can all decide whether a country really is democratic. Dahl’s analysis of the evidence leads him to conclude that the following criteria must be met for a regime to be considered truly democratic: elected officials control policy-making; there are free and fair elections of officials; everyone must have a right to vote; everyone has the right to run for office; there is freedom of speech; alternative information is available; and people can form free, independent political groups.

Ways in to the text Who was Robert Dahl?

What does Democracy and its Critics Say?

Why does Democracy and its Critics Matter?

Dr Astrid Noren Nilsson holds a doctorate in politics and international studies from the University of Cambridge. She currently teaches at the University of Lund in Sweden, and is the author of the monograph Cambodia’s Second Kingdom: Nation, Imagination, and Democracy (Cornell SEAP, 2016). Her research interests include democratic change, nationalism, the politics of memory, and emerging notions of citizenship and social change in South-East Asia.