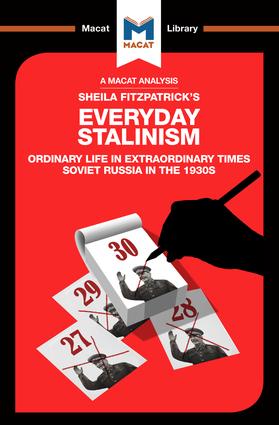 How was the Soviet Union like a soup kitchen? In this important and highly revisionist work, historian Sheila Fitzpatrick explains that a reimagining of the Communist state as a provider of goods for the ‘deserving poor’ can be seen as a powerful metaphor for understanding Soviet life as a whole. By positioning the state both as a provider and as a relief agency, Fitzpatrick establishes it as not so much a prison (the metaphor favoured by many of her predecessors), but more the agency that made possible a way of life.

Fitzpatrick’s real claim to originality, however, is to look at the relationship between the all-powerful totalitarian government and its own people from both sides – and to demonstrate that the Soviet people were not totally devoid of either agency or resources. Rather, they successfully developed practices that helped them to navigate everyday life at a time of considerable danger and multiple shortages. For many, Fitzpatrick shows, becoming an informer and reporting fellow citizens – even family and friends – to the state was a successful survival strategy.

Fitzpatrick's work is noted mainly as an example of the critical thinking skill of reasoning; she marshals evidence and arguments to deliver a highly persuasive revisionist description of everyday life in Soviet time. However, her book has been criticized for the way in which it deals with possible counter-arguments, not least the charge that many of the interviewees on whose experiences she bases much of her analysis were not typical products of the Soviet system.

Who was Sheila Fitzpatrick?

What does Everyday Stalinism: Ordinary Life in Extraordinary Times: Soviet Russia in the 1930s Say?

Victor Petrov is a PhD candidate in Modern European History at Columbia University, where his research focuses on Eastern Europe. He received his BA (2009) and M.Phil.(2011) in Modern History from Oxford University.

Riley Quinn holds Master’s degrees in Politics and International Relations from both LSE and the University of Oxford.