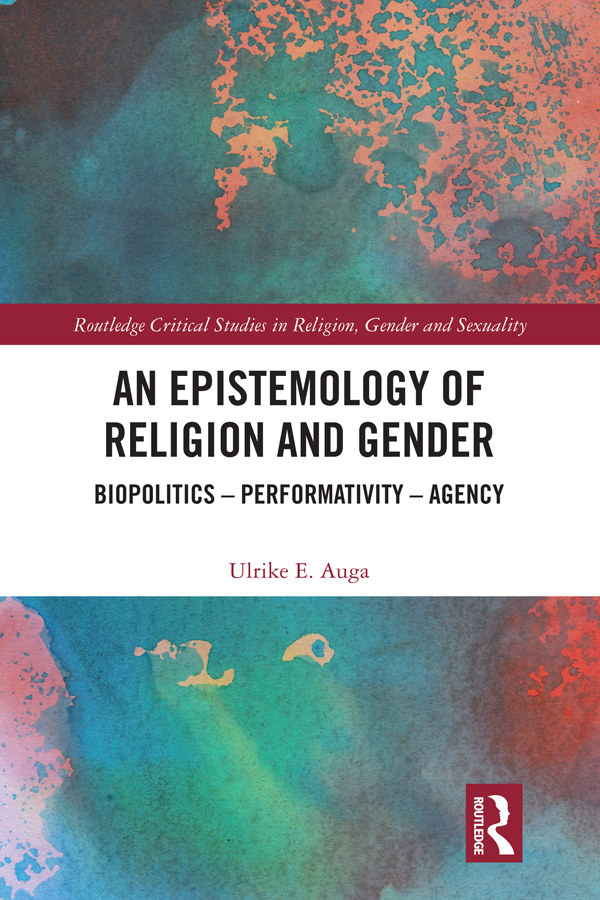 An Epistemology of Religion and Gender

This book puts forward a new epistemological framework for a theory of religion and gender’s role in the public sphere. It provides a sophisticated understanding of gender and its relation to religion as a primarily performative category of knowledge production, rooting that understanding in case studies from around the world.

Gender and religion are examined alongside biopolitics and the influence of capitalism, neoliberalism and empire. The book analyses the interdependence of religion, gender and new nationalisms in the Palestinian territories, South Africa and the USA, scrutinising the biopolitical interferences of nation states and dominant political and religious institutions. It then moves on to uncover counter-discourses and spaces of activism and agency in contexts such as East Germany and the Occupy Wall Street movement. Using gender, queer and trans theory in tandem with postcolonial and post-secular perspectives, readers are shown a more nuanced understanding of critical contemporary questions related to religion, gender and sexuality.

This is a bold new take on religion, gender and public life. As such, it will be of keen interest to scholars of Religious Studies and Gender Studies, as well as those working on religion’s interaction with Politics, Sociology and Social Activism.

"Through extensive research across continents and informed by large scale collaborations across disciplines, An Epistemology of Religion and Gender, demonstrates the stakes of academic undertakings. Professor Auga shows her readers that by rethinking religion and gender we might also shift longstanding public controversies over and sexuality, decolonise public space, create new ways of responding to conflict and even violence, undertake innovative activism in response to injustice, and imagine the future differently. It is a journey well worth taking."

"Ulrike Auga’s An Epistemology of Religion and Gender is a trailblazing work in its development of new epistemic insights and angles for the study of religion, the body, and power. This book brings together a body of original theoretical work, exemplary case studies and innovative perspectives that are likely to influence the field for many years to come."

"From a perspective of situated knowledge, the book brings together epistemological debates from religious studies, gender studies and performance studies and applies them on such various fields as the Occupy Wall Street movement in New York, agency photography in Mali and masculine hegemony in the South African Truth and Reconciliation Commission. By capturing worldwide past and present debates, it invites students and scholars to creatively rethink semantic categories."

2 Tensions in the Study of Gender, Religion and Theology

3 Gender and Religion as Categories of Knowledge. Deconstruction, Discourse Analysis, Intersectionality, Deessentialisation, Disidentification and the Critique of Ancient Texts

4 The Political-Performative Power of Language, Appropriation, Cultures of Translation and Travelling Theory. The Discourse of the "Bible in Just Language" against Gender and Social Exclusions and Anti-Judaism

Part II Religion, Secularity and Gender after the Post-Secular Turn

5 Fundamentalisms and Secularisms. Sovereign Power, Biopolitical Citizenship and the Possibilities of Subaltern Agency

6 The New Role of Religion in the Public Sphere. Redefining Secularity and Secularisms in Europe and Beyond

Part IV Religion, Gender, Activism and the Multiplicity of Agency

10 Religion, Gender and the Peaceful Revolution of 1989. On the Conflictual Relationships between Feminisms and Theologies in East and West Germany

11 Imagining Futures through the Multitude. Religion, Gender and Agency in the Occupy Wall Street Movement

14 Creating Archives of Agency Photography after the Post-Secular Turn. On the Performativity of Tattoos, Textiles and Islam in Mali

Ulrike E. Auga is visiting Professor at the Intersectional Centre for Inclusion and Social Justice (INCISE) at Canterbury Christ Church University, UK, and the Centre for Gender Studies and the Advancement of Women at the University Salzburg, Germany. She is also a fellow in the Centre for transdisciplinary Gender Studies, Humboldt University of Berlin and the Center of Theological Inquiry, Princeton. She has written multiple books and articles on religion and gender and was awarded the Kaethe-Leichter, Mary-Douglas and Dietrich-Bonhoeffer Prizes as well as the Humboldt-Princeton-Strategic-Partnership-Grant.

This book series is dedicated to the critical study of religion, gender and sexuality, in conversation and exchange with the broader qualitative social sciences and humanities. It publishes cutting-edge innovative research from both established scholars and up-and-coming researchers. Fundamentally concerned with "religion" as a field of imagination and power, the series explores the complex and dynamic relationship between religious knowledge, symbols and practices with categories of gender and sexuality in global contexts.

The series welcomes scholars whose work is situated in the interdisciplinary study of religion, gender and sexuality, especially those who incorporate critical theoretical perspectives, innovative methodologies, and/or strong epistemological approaches in their projects. Books published in the series may either privilege empirical research, as long as it is embedded in and contributes to epistemological, methodological and theoretical reflections, or may privilege theoretical research, as long as it is concerned with providing understanding into critical contemporary questions relating to religion, gender and sexuality.