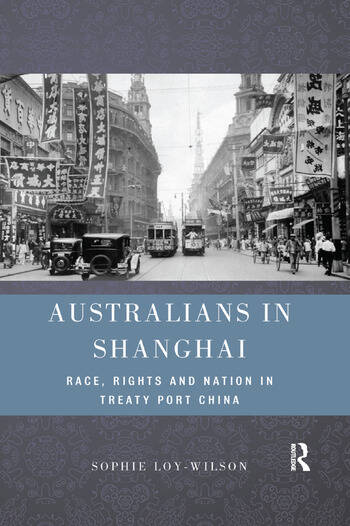 In the first half of the twentieth century, a diverse community of Australians settled in Shanghai. There they forged a ‘China trade’, circulating goods, people and ideas across the South China Sea, from Shanghai and Hong Kong to Sydney and Melbourne. This trade has been largely forgotten in contemporary Australia, where future economic ties trump historical memory when it comes to popular perceptions of China. After the First World War, Australians turned to Chinese treaty ports, fleeing poverty and unemployment, while others sought to ‘save’ China through missionary work and socialist ideas. Chinese Australians, disillusioned by Australian racism under the White Australia Policy, arrived to participate in Chinese nation building and ended up forging business empires which survive to this day.

This book follows the life trajectories of these Australians, providing a means by which we can address one of the pervading tensions of race, empire and nation in the twentieth century: the relationship between working-class aspirations for social mobility and the exclusionary and discriminatory practices of white settler societies.

Sophie Loy-Wilson is a Lecturer in Australian History at the University of Sydney.

'A fascinating study of the long, and often misunderstood, relationship between China and Australia. This book raises important questions about what it means to be Chinese, and what it means to be Australian.' — Jim McAloon, Associate Professor, History, Victoria University of Wellington, New Zealand.

'Much past historical writing, relying on English language sources, has worked within 'national' borders and in the terms of the British Empire. Loy-Wilson's beautifully written book breaks apart those artificial constraints by looking into the complex worlds of the people who moved across borders: Chinese workers returning from Australia, their white Australian wives coming with them to China, the impoverished Australian workers who came to Shanghai seeking work and the many missionaries, traders and teachers who all moved backwards and forwards. […] [The] book's originality draws even more deeply on Loy-Wilson's sophisticated analysis of the tensions in these interactions - the misinterpretations, the confusions and the conflicts - which arise from the histories of each side of this story, the Chinese and the Australian. Shaped by context and time and by the rapidly changing technologies of transport and communication, these interactions were far from simple but they were powerful nonetheless. This is an important book which will change the way the history of both Australia and China can be written in the future.' — Heather Goodall, Professor of History, University of Technology Sydney

'With great sensitivity, a sharp eye for detail and a keen understanding of the complex interplay of shifting cultural, ethnic and political identities, Sophie Loy-Wilson uncovers one of the least understood aspects of the relationship between Australia and China, the experiences and contributions of Australian Chinese.' — Lachlan Strahan, author of Australia's China: Changing Perceptions from the 1930s to the 1990s

'Historians love to proclaim a "new" history, but this book really is new. It is a brilliant contribution to Australian, Chinese, and world histories, the kind of cosmopolitan history that makes traditional descriptors, like "Australian history" scarcely adequate. It evokes a world of social, economic, and political exchanges between Australia and treaty port China – tracing the mobile lives of Chinese and other Australians, including entrepreneurs, trade unionists, missionaries, and internationalists. With fascinating detail and beautifully written, it is a pleasure to read, and an important reminder that people in both China and Australia have built a history of connections that influence both countries today.' — Ann Curthoys, Emeritus Professor of History, University of Western Australia

'Sophie Loy Wilson’s book […] adds a dimension that other books on Shanghai that I have read hardly even mention, namely the Australians in the port city during the interwar years of the twentieth century. […] As with many good books, there are multiple threads of a story around a central theme, that of unusual Australian migration and settlement patterns in China during the interwar years. […] But the story that most enchants and surprises is one that Loy-Wilson recovers and recounts with great gusto and verve: the transnational history of an exceptional Australian family whose origins were Chinese, the indefatigable Kwok family and the incomparable Daisy Kwok. […] Loy-Wilson presents her work as "transnational history," as "Australia in a Chinese context," as "Australia from the inside out," and as "Chinese ‘agency’ in the shaping of Australian life." […] In so doing, she is helping to define the shape and substance of a growing field of interest for Australian scholars, joining the ranks of distinguished colleagues John Fitzgerald, Mei-fen Kuo, Shirley Fitzgerald, Tseen Khoo, Kate Bagnall, and others.

Because Loy-Wilson opens many doors to the seriously curious scholar and onlooker, one wishes that the book could be longer, that is, contain more rich details and fleshed-out discussions.  It would also be helpful to anyone who wishes to continue pursuing threads that she has sewn onto this complicated tapestry a bibliography at the end, to spare the reader from looking for sources among the footnotes.' — Evelyn Hu-DeHart, Professor of History, American Studies and Ethnic Studies, Brown University

'Australians in Shanghai is for Loy-Wilson a personal story. Indeed she describes the book as an origins story of her own career as a historian (xiii). […] The personal connection that the author has with the story of Australians in China makes for compelling reading. […] Overall, Loy-Wilson has produced a ﬁne book which makes an important contribution to Australian history by documenting little-known connections with China. The book is highly original and employs sources in a creative way to shed new light on Australian society during the interwar years.' — Australian Historical Studies, 49(1), pp. 137–138