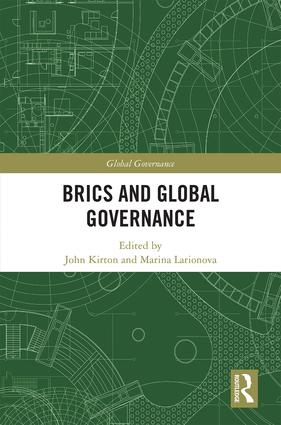 The past few decades have witnessed the development of an increasingly globalised and multipolar world order, in which the demand for multilateralism becomes ever more pronounced. The BRICS group established in 2009, has evolved into a plurilateral summit institution recognized both by sceptics and proponents as a major participant in the international system.

Addressing the BRICS’s role in global governance, this book critically examines the club’s birth and evolution, mechanisms of inter-BRICS cooperation, its agenda priorities, BRICS countries’ interests, decisions made by members, their collective and individual compliance with the agreed commitments, and the patterns of BRICS engagement with other international institutions. This volume advances the current state of knowledge on global governance architecture, the BRICS role in this system, and the benefits it has provided and can provide for world order.

This book will interest scholars and graduate students who are researching the rise and role of emerging powers, global governance, China and India’s approach to global order and relationship with the United States, Great Power politics, democratization as a foreign policy strategy, realist theory-building and hegemonic transitions, and the (crisis of) liberal world order.

"This book presents an excellent update on BRICS which has come to be an exemplar of contemporary plurilateral summit institutions. Critical analysis by eminent researchers from four continents brings out various key features of BRICS: mission, values, agenda, evolving institutional identity, compliance performance and models of engagement with international organizations and so on. They reveal to us its success factors for such an enduring performance across global summitry that underscores the shared interests and priorities of BRICS nations. This multidisciplinary study produced by two celebrated editors is a convincing evidence that despite distinct historical, political, economic and cultural contexts, the future cooperation of the BRICS as a concert of equals remains grounded in its members’ shared values and goals." - Swaran Singh, Professor, School of International Studies, Jawaharlal Nehru University, New Delhi

"The value of this book rests squarely on its distinctive mix of contributors, impressive experts situated both within the BRICS countries and beyond. Taking issue with the sceptics, Kirton and Larionova have mobilized a valuable countervailing analysis highlighting the BRICS relative success in performance with respect to global governance." - Andrew F. Cooper, Professor, the Balsillie School of International Affairs and the Department of Political Science, University of Waterloo.

1 The Rise of New Institutions

Part II: The Evolving Institutional Identity of The BRICS

2 Explaining the Solid, Strengthening Success of the BRICS Summit

5 The New Development Bank in Global Finance and Economic Architecture

7 The BRICS Security Agenda: Russia’s Approach and the Outcomes of the Ufa Summit

9 Prospects for Cooperation in Science, Technology and Innovation among the BRICS Members

11 The BRICS Agenda in the Asia-Pacific Region

12 South Africa in BRICS: Last But Not Least

14 Looking into the Future of the BRICS

Global governance is growing rapidly to meet the compounding challenges of a globalized 21st-century world. Many issues once dealt with largely at the local, national or regional level are now going global, in the economic, social and political-security domains. In response, new and renewed intergovernmental institutions are arising and adapting, multilevel governance is expanding, and sub-national actors are playing a greater role, and create complex combinations and private-partnerships to this end.

This series focuses on the new dynamics of global governance in the 21st century by:

In all cases, it focuses on the central questions of how global governance institutions and processes generate the effective, legitimate, accountable results required to govern today’s interconnected, complex, uncertain and crisis-ridden world.