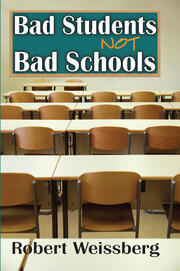 Americans are increasingly alarmed over our nation's educational deficiencies. Though anxieties about schooling are unending, especially with public institutions, these problems are more complex than institutional failure. Expenditures for education have exploded, and far exceed inflation and the rising costs of health care, but academic achievement remains flat. Many students are unable to graduate from high school, let alone obtain a college degree. And if they do make it to college, they are often forced into remedial courses. Why, despite this fiscal extravagance, are educational disappointments so widespread?

In Bad Students, Not Bad Schools, Robert Weissberg argues that the answer is something everybody knows to be true but is afraid to say in public America's educational woes too often reflect the demographic mix of students. Schools today are filled with millions of youngsters, too many of whom struggle with the English language or simply have mediocre intellectual ability. Their lackluster performances are probably impervious to the current reform prescriptions regardless of the remedy's ideological derivation. Making matters worse, retention of students in school is embraced as a philosophy even if it impedes the learning of other students. Weissberg argues that most of America's educational woes would vanish if indifferent, troublesome students were permitted to leave when they had absorbed as much as they could learn; they would quickly be replaced by learning-hungry students, including many new immigrants from other countries.

American education survives since we import highly intelligent, technically skillful foreigners just as we import oil, but this may not last forever. When educational establishments get serious about world-class mathematics and science, and permit serious students to learn, problems will dissolve. Rewarding the smartest, not spending fortunes in a futile quest to uplift the bottom, should become official policy. This book is a bracing reminder of the risks of political manipulation of education and argues that the measure of policy should be academic achievment.

Preface
1 Introduction: A Nation at Risk or a Nation in Denial?
2 Bad Students, Not Bad Schools
3 Motivating Students or You Can Take a Horse to Water and Make a Dehydrated Equine Feel Better about Herself
4 Closing the Racial Gap in Academic Achievement
5 The "War" on Academic Excellence
6 The Museum of Failed Educational Reforms
7 Business-like Solutions to Academic Insufficiency
8 The Alluring Choice Solution or Why Educating Students Is Not Manufacturing Cheap Flat Screen TVs
9 Reforming Education Is the New Great Society and Why Fixing Schools May Well Subvert the Social Peace
10 Hope?
Works Cited
Index