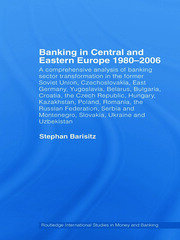 Banking in Central and Eastern Europe 1980-2006: From Communism to Capitalism

Comparative in structure and covering an extensive number of transition countries in its survey, this comprehensive book overviews the development of the banking systems in Central and Eastern European since the communist era until the present time.

A significant publication, it is fascinating reading for all those studying and working in the areas of transition economy, macro and monetary economy and economic history

'A thorough and up to date study of financial sector reform in transition economies with a particular focus on banking.' Philip Mullineux, Professor of Global Finance, Birmingham Business School

'Stephan Barisitz analyzes how the Central and Eastern European banking systems came fully under the sway of foreign strategic investors, what this caused, and what other developing regions can learn from this.' Neue Zürcher Zeitung (Switzerland)

'This is a book that everyone dealing with banking in Central and Eastern Europe should read. It's not only a treasury of detailed data and facts, but also gives valuable information on the status quo and the near future.' Bank-Archiv (Austrian Society for Bank Research)

'The detailled knowledge presented in the form of a synthesis is really impressive, which shows how much Barisitz is an expert in analyzing banking sector evolution, reform and transformation throughout Central and Eastern Europe.' Wladimir Andreff, Professor of Economics, Université de Paris I Panthéon Sorbonne, President of the French Economic Association

'This in-depth comparative study is well suited for scientists and students who deal with banking in the transition economies. It also provides a perspective for interpreting the entire transformation process in Central and Eastern Europe.'  Professor Péter Gál, Chief Economist of the Hungarian Development Bank, Chairman of the Quarterly Hungarian Economic Review, Development and Finance

'The information and analysis in this book provide a most helpful guide to understanding the important policy choices yet to be made in transitioning countries as well as in developing and emerging market economies.'
John P. Bonin, Chester D. Hubbard Professor of Economics and Social Science, Editor, Journal of Comparative Economics, 1996-2006