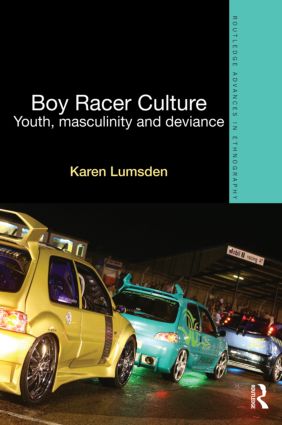 On the public roads boy racers are a foreboding presence, viewed with suspicion and derision by the ‘respectable’ motorist. The problem of the young (male) driver is one which has plagued authorities and governments due to youths’ acclaimed propensity to engage in deviant and dangerous driving behaviours.

Boy Racer Culture sheds light on the boy racer phenomenon through ethnographic research with the notorious ‘Bouley Basher’ culture in the city of Aberdeen, Scotland, and the moral panic on the part of outside groups including the local community, police, politicians and media. This book examines the creation of masculine and feminine identities in a traditionally male-dominated subculture through car-related rituals such as ‘modding’, subcultural media and events, and the quest for celebrity status via public performances.

Boy Racer Culture challenges common misconceptions surrounding the boy racer, the ‘problematic’ young (male) motorist and the car modifier. It will be essential reading for an international audience including sociologists and criminologists, particularly those with an interest in youth culture, subcultures, moral panics, car culture, anti-social behaviour, and the governance and policing of the roads.

Introduction: Rebels of the Road 1. Car Cultures and Deviance 2. Setting the Scene: The History of Aberdeen’s Boy Racers 3. Fuelling the Panic: Societal Concern and Media Images of the Boy Racer 4. The Politics of the Road: Policing, Governing and Educating the Boy Racer 5.'We're not Boy Racers but they are': The Stickiness of Labels 6. Rites of the Road: 'Modding', Subcultural Media and Public Performances 7. Gendered Interactions in the Boy Racer Culture 8. Conclusion: Contested Realities.

Ethnography is a celebrated, if contested, research methodology that offers unprecedented access to people's intimate lives, their often hidden social worlds and the meanings they attach to these.  The intensity of ethnographic fieldwork often makes considerable personal and emotional demands on the researcher, while the final product is a vivid human document with personal resonance impossible to recreate by the application of any other social science methodology.  This series aims to highlight the best, most innovative ethnographic work available from both new and established scholars.