British Untouchables
A Study of Dalit Identity and Education 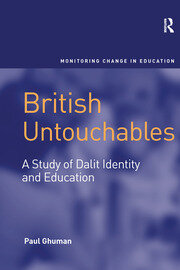 British Untouchables: A Study of Dalit Identity and Education

Dalits, formerly called 'untouchables', remain the most oppressed community in India, and indeed in South Asia and have, until recently, been denied human and civic rights. On emigration to the UK and other Western countries they faced a double disadvantage: caste discrimination and racial discrimination from 'white' society. However, in the late 1990s, second-generation Dalit professionals challenged their caste status and Brahmanism in the West and in South Asia. This work provides a major study on the issues facing the education of Dalit children and young people growing up in Britain. The book is based on extensive fieldwork and uses a qualitative research methodology, including in-depth interviews with parents, teachers and children, and detailed observations in homes, schools and places of worship e.g. gurdwaras. It offers a detailed view of areas such as socialisation of children, schooling and education, examination success, parental perceptions of education, bilingualism, acculturation patterns, cultural conflicts and caste and social identities. Central to this work, too, is a thorough introduction to the religious concepts that underpin the notion of 'untouchability' in Hinduism. This is a significant contribution to this under-researched community by a scholar who is one of the leading authorities on the education of South Asian children in Britain.

Paul Ghuman is Emeritus Professor and former Head of Education at Aberystwyth University. In 2003 he was a visiting scholar at the University of California, Berkeley and is an Associate Fellow at the University of Warwick. He has published extensively on issues of cognitive development, bilingualism, biculturalism and is recognised as one of Britain's leading authorities on the intellectual development, educational attainment, and ethnic identity of the UK-born Asian population.

'Dr. Paul Ghuman has written an important and useful book concerning caste and its effects and persistence in the Midlands area of England, a task for which he is, eminently qualified eminently qualified, having published widely on the ethnic identity of Asians living in England and a variety of topics including multiculturalism and education. …The book presents a very interesting examination of how caste is used in a new setting to define and differentiate communities. … written in a very accessible style and could be used either in undergraduate or graduate courses.'
Missiology

'Ghuman's latest book is a highly original study of the Indian "Untouchables" - the Dalit. In a highly readable style, he reveals that the Dalit remain an oppressed minority, but that education is providing a means for progression. Based on scholarly research in a Punjabi village and the English Midlands, this is a delightful book in every respect.'
Colin Baker, Bangor University, Wales

'Paul Ghuman has produced a highly sensitive and perceptive account of the lives and experiences of British Indian Dalit individuals. This seminal book provides a unique perspective on the complexity of these individuals’ position within contemporary Britain and on their families’ origins in India. Ghuman is to be congratulated on conducting such an original, rich and insightful study.'
Martyn Barrett, University of Surrey, UK

'This book enhances our understanding of the Dalits, by providing new empirical data on a group whose experiences remain under researched. The strengths of the book are the comparative element between the UK and the Punjab and the focus on young people and their parents’ views on the caste system. This book would be an excellent addition to courses on education, sociology and social theory and could be used by students, teachers, lecturers and educational practitioners. The book enhances our understanding of “outsider” and “other” groups… it is a welcome addition to current literature on the experiences of minority ethnic groups.'
Educational Review

'Paul Ghuman’s book provides an excellent introduction to caste describing the different concepts of caste, its historical and political development and its continuing, intimate relationship with religious movements, including those promising an escape from the stigma  of ‘untouchability’. For this alone the book is worth reading… However, the book also provides insights into the operation and impact of caste on people’s lives in the UK today… Overall, the book helps the reader to understand this important influence on the psychological and social experience of some South Asians in Britain.'
The Psychologist

'Professor Ghuman should be congratulated for undertaking such a brave venture for such exposure could result in rejection from the very communities he is studying.  He seems to have negotiated the balance between being true to his findings and illustrating the on-going issue of caste which seems to be embedded in the psyche of some British-Indians and Sikhs… This book is written in an accessible style and would be an invaluable starting point for sociology students, students studying education and researchers who want to delve deeper into the struggles, achievement and attainment of Indian pupils.'
British Journal of Educational Studies

'… the book is written in an easily accessible, nontechnical style which should ensure a wide readership about an important issue in some schools and communities in contemporary Britain.'
Cambridge Journal of Education

'Ghuman’s analysis of the identity formation of Dalit immigrants deserves attention… the book offers a fascinating and thought-provoking read… this volume is an excellent contribution to a vast growing area of study and should give momentum to further studies of Dalit diasporas in other parts of the world.'
Contemporary South Asia