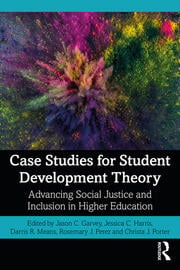 This much-needed case study book provides higher education and student affairs graduate students, practitioners, and faculty with the tools to enhance their learning of student development theory and to apply this learning to practice. Each chapter offers a summary of theory – covering traditional and newer student development models – in addition to multiple case studies that help readers focus on practice that fosters social justice and inclusion.

The case studies for each chapter represent a range of institutional types and diverse student populations, offering an opportunity to explore the intersections of various developmental processes and to foster social justice and inclusion in higher education contexts. Guiding questions at the end of each case study offer opportunities for further discussion and critical reflection. An essential text for every student development course, Case Studies for Student Development Theory enhances student learning and development in higher education while also addressing how students’ social identities intersect with college campus environments.

. "But We're Not One of the Bad Ones": White Racial Innocence and Identity Development in a Service-Learning Context by Zak Foste and Antonio Duran

Being Black and Immigrant: A Foreigner to Some, and An Outsider to Others by Dayne Hutchinson and Dawn Ogali

Undocuqueer: Coming out of the closet and shadows by Jesus Cisneros

"It's the Intersections That Get Sticky": Navigating Ethnic and Sexual Identities by Mike Hoffshire and Louise Michelle Vital

It's Not All Rainbows and Unicorns: Sexual Identity and Ability in Residence Life by Tony Cawthon and Rachel Wagner

"I need to pump!": Motherhood Receptiveness and Lactation Accommodation in Higher Education by Cindy Phu

"They're Ruining My Culture…I think": Examining the Nuances of Multiple Worldview Identities by Amanda Armstrong and Jim Barber

Can I Be Both? Exploring the Intersections of Religious, Spiritual, and Sexual Identities by Darris R. Means and Rosemary J. Perez

"We are Definitely Not Privileged": White and Working Class at a Community College by Nicholas Tapia-Fuselier

College Student Development and the Complex Intersections of Class, Race, and Gender by Avery Olson

Complicating the Intersections of Class, Race, and Generation Status by Lamesha Andrews and Patrice French

"Welcome Home?": Living Between Cultures for Third-Culture Kids in College by Carrie Kortegast

One of Few: Campus Turmoil Leads to Personal Doubt by Teresita Alvarez-Cortez and Carina Buzo

The Promotion: Examining the Intersections of Psychological Identity Development, Moral Development, and Self Authorship by Daniel Calhoun, Steven Tolman, and Brandin Howard

Challenging White Nationalism through Friendship: The Power of Peers by Kathleen Manning

What is Too Loud? Music Meets Intellectual Development in the Residence Hall by Stacy A. Jacob and Sammie Walker

"The Lady Doth Protest Too Much": Moral Development at the Intersection of Religion and Sexuality by Drew Ashby-King, Karen Boyd, and Tony Cawthon

Black or Blue? Exploring Whose Lives Matter While Balancing the Complexities of Identity and Morality by Tynesha McCullers and Aaron Hood

"It's (not) in the Syllabus!" Self-Authorship and Transitions for Military Connected Students by Jessica Belue Buckley, Heather Turner, Meghan Pifer, and Ralph Allan Cook, Jr.

"You're Either Down, or You're Not!": Self-authorship and Student Activism by Lincoln Wesley Harris, Jr.

Jason C. Garvey is Assistant Professor of Higher Education and Student Affairs Administration at the University of Vermont, USA.

is Assistant Professor of Higher Education and Organizational Change at the University of California, Los Angeles, USA.

is Assistant Professor of College Student Affairs Administration at the University of Georgia, USA.

is Assistant Professor of Higher Education and Student Affairs and the Director of the Education for Social Justice Graduate Certificate at Iowa State University, USA.