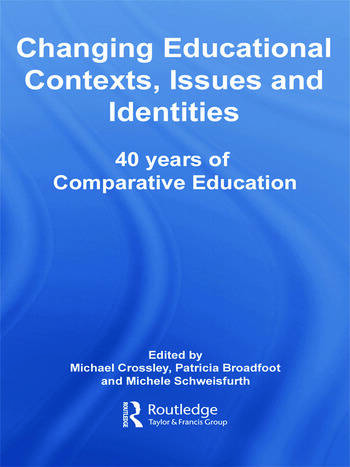 Documenting major intellectual and paradigmatic changes in the field of comparative education in the light of the history and development of the journal Comparative Education, this book compiles a selection of articles from forty years of the journal’s distinguished history. It illustrates how changing times have been reflected in the nature and quality of published comparative research.

Contributors explore the impact of key issues such as marketisation, accountability and globalisation upon policy and practice world-wide. They explore how new challenges faced by the social sciences have seen shifts in the contexts, issues and priorities attended to by comparatives and how different approaches to comparative education have influenced the intellectual and professional identities and positioning of those involved.

Bridging theoretically oriented scholarship with empirically grounded research relating to issues of policy and practice and with chapters addressing questions of relevance throughout the world, this book is an invaluable resource of ideas and stimuli for further thinking and research.

Patricia Broadfoot is Professor of Education and Pro Vice Chancellor at the University of Bristol. She will take up office as Vice Chancellor of the University of Gloucestershire in September 2006. She was editor of Comparative Education from 1991 to 2003 , and founder editor for 10 years of the journal Assessment in Education. She has published many books and articles in the field of comparative education, many of which report the findings of a series of empirical comparative studies of teachers and pupils in England and France conducted over a period of twenty years. Prof Broadfoot is a former President of the British Educational Research Association and of the British Association for International and Comparative Education, she has been a Council member of the Economic and Social Research Council since 2001 and is also involved with many national policy committees. She was elected as a Founding Academician of the Social Sciences (AcSS) in 2000.

Dr Michele Schweisfurth is Senior Lecturer in International Education at the Centre for International Education and Research, University of Birmingham, UK. Her research and publications focus on developing and transitional countries, especially in relation to education for democracy, and the potential of teachers as agents of social change. Global citizenship education and intercultural learning are further areas of interest. She is on the editorial boards of the journals Comparative Education, International Journal of Educational Development, and International Journal of Research and Method in Education, and was Conference Convenor for the 2003 and 2005 UKFIET -‘Oxford’ Conference on Education and Development. She has been a member of the editorial board of Comparative Education since 1998, and is currently reviews editor for the journal. Originally from Canada, she has also lived in Sierra Leone, Indonesia and the Turks and Caicos Islands.