City, Street and Citizen
The Measure of the Ordinary 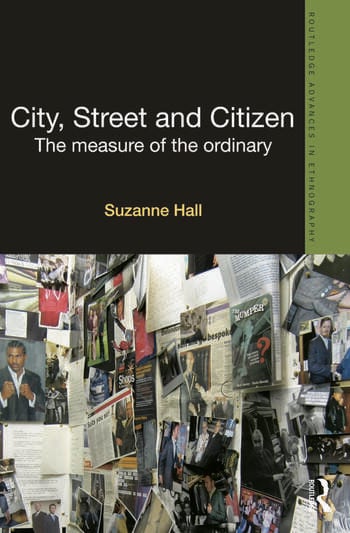 City, Street and Citizen: The Measure of the Ordinary

How can we learn from a multicultural society if we don’t know how to recognise it? The contemporary city is more than ever a space for the intense convergence of diverse individuals who shift in and out of its urban terrains. The city street is perhaps the most prosaic of the city’s public parts, allowing us a view of the very ordinary practices of life and livelihoods. By attending to the expressions of conviviality and contestation, ‘City, Street and Citizen’ offers an alternative notion of ‘multiculturalism’ away from the ideological frame of nation, and away from the moral imperative of community. This book offers to the reader an account of the lived realities of allegiance, participation and belonging from the base of a multi-ethnic street in south London.

‘City, Street and Citizen’ focuses on the question of whether local life is significant for how individuals develop skills to live with urban change and cultural and ethnic diversity. To animate this question, Hall has turned to a city street and its dimensions of regularity and propinquity to explore interactions in the small shop spaces along the Walworth Road. The city street constitutes exchange, and as such it provides us with a useful space to consider the broader social and political significance of contact in the day-to-day life of multicultural cities.

Grounded in an ethnographic approach, this book will be of interest to academics and students in the fields of sociology, global urbanisation, migration and ethnicity as well as being relevant to politicians, policy makers, urban designers and architects involved in cultural diversity, public space and street based economies.

1. Introduction: Urban Multiculture: an ordinary orientation 2. Making practice visible 3. The boundaries of belonging 4. The art of sitting 5. The art of attire 6. The politics of nearness 7. Street measures 8. Conclusions: Alternatives.

Suzanne Hall is an urban ethnographer, and Lecturer and Researcher at LSE Cities (London School of Economics and Political Science, UK). Her research and teaching interests are foregrounded in local expressions of global urbanisation, particularly social and spatial forms of inclusion and exclusion, urban multiculture, the design of the city, and ethnography and visual methods. She is a recipient of the Rome Scholarship in Architecture (1998 - 1999) and the LSE's Robert McKenzie Prize for outstanding Ph.D. research (2010).

'Suzi Hall breathes new life into discussions of multiculturalism, citizenship and identity. These commonly focus on nation-states, but in this lucid, engaging ethnography she shows how local practices and their contexts shape a sense of belonging and nearness that facilitates relations across lines of difference.'
-Craig Calhoun, President of the Social Science Research Council

'Here is the story of a street in south London, a working-class part of the city.  Suzanne Hall explores its street-life as a kind of theatre; she shows how sociability develops as bodily gestures, clothes, and speech become performing practices. The evocative ethnography is meant to prompt readers to think about how streets in other cities, other settings, might be designed to become vivid spaces. In sum, this is an impressive and moving book.'
-Richard Sennett, University Professor of the Social Sciences at New York University

'With the precision of an architect's eye and the attentiveness of an ethnographer's ear Suzanne Hall offers us a profound and urgently needed account of the multicultural life in Britain. This book should be read widely by anyone who has a serious interest in the future of city life.'
-Les Back, Professor of Sociology, Goldsmiths

'This work stands as a crucial piece in a larger puzzle of visualizing the dynamics of urban multi-cultures and their manifestation in the ordinary London streetscape. As Hall rightly proclaims, the implications of such research can operate on various registers of policy and planning, helping to critique the politics of secular nationalism and the multiple, unfounded assumptions on which it is based.

Spurred by Stuart Hall’s...prediction that "the capacity to live with difference is, in my view, the coming question of the twenty-first century," this research on a multi-ethnic street in London grasps the lived realities and consequences of rapid urban change.'
-Andrew Wade in Polis, www.thepolisblog.org, posted 12 June 2012

'South-east London, by virtue of its poverty, ‘otherness’, and ordinariness has long been a source for the sociological imagination, and this has been manifest in both academic texts and wider culture. Hall’s book makes an important, rigorously researched, and thoughtfully structured contribution.'

'Hall’s book embodies a creative intersection between architecture and ethnography at its heart....Certainly, readers of City, Street and Citizen will be convinced of the potential of such an ethnographic-architectural approach, which grounds architecture itself in the everyday, and is insightful and evocative in its presentation of urban multiculturalism from the bottom up.'
-Ben Campkin, University College London, in the LSE Review of Books, posted 16 Nov 2012

'The central question of this book is what kind of city and citizen does a street make? The book is testament to the value of ethnography in capturing these moments of ‘proximity and crossover’ of the spoken and corporeal and of the capabilities that are built up through encounters between people. Hall offers a rich and insightful analysis of how one ordinary street might help us to understand the formation of cities and the book will be of interest to urbanists and sociologists alike. Hopefully, it will also reach those who are aiming to intervene in and plan urban spaces, as Hall asks, how can we create multicultural places when we can’t even recognize those that already exist?'   Emma Jackson, University of Glasgow, in the International Journal of Urban and Regional Research, 2013

Ethnography provides us with a means through which to understand the extraordinary and yet ordinary ways in which people produce their lives in particular contexts. What Suzanne Hall terms the ‘‘visible convergence of diversity’’ on the Walworth Road in London is the focus of a book-length study whose overall purpose is to render visible practices in a multicultural setting.

What this study does…is provide a celebration of the everyday ways in which senses of belonging arise in the contexts of diversity and inequality that characterize the contemporary city.

The city street is the most taken-for-granted space in the social imagination. But as both backstage and foreground, social space and built environment, it is the premiere arena of the urban public realm where citizens are formed.

Suzanne Hall’s study encourages us to appreciate the cultural value of local shopping streets and to take action to protect their fragile social core. This book breathes new life into multicultural ideals by equating them with the ‘ordinary’ diversity of local shops.