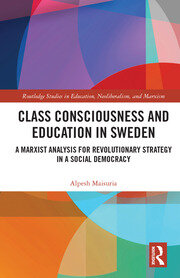 Class Consciousness and Education in Sweden: A Marxist Analysis of Revolution in a Social Democracy

Emerging from a Marxist perspective, this book focuses on the importance of social class and the role of education broadly in relation to the possibility of revolutionary change in Sweden and beyond. Critically tracing the celebrated so-called ‘Swedish model’ from its inception to its current neoliberalisation, Maisuria explores the contours of class as part of social democratic history, culture and education, especially against the alternatives of communism and fascism. Presenting empirical research on class consciousness within a higher education context, Maisuria analyses student testimonies on their perceptions of social democracy and ‘Swedishness’ with ethno-racial dynamics, which is subjected to a Gramscian and Critical Realist derived explanatory critique for social transformation.

CHAPTER 1: CLASS CONSCIOUSNESS TOWARDS THE POSSIBILITY OF REVOLUTION

CHAPTER 3: THEORETICAL AND PHILOSOPHICAL MARXISM AS A SOCIAL SCIENCE

PART TWO: DESIGNING AN EMPIRICAL STUDY OF CONSCIOUNESS AND PRACTICES OF CLASS

PART THREE: RESEARCHING CONSCIOUNESS AND PRACTICES OF CLASS IN SWEDEN

CHAPTER 5: THE FINDINGS OF A CASE STUDY ON CONSCIOUSNESS AND PRACTICES OF CLASS IN SWEDEN

CHAPTER 6: AIMING FOR A GREATER UNDERSTANDING OF LIFE SWEDEN 317

PART FOUR: MAKING SENSE OF CONSCIOUSNESS AND PRACTICES OF SOCIAL CLASS IN SWEDEN 327

CHAPTER 7: DEVELOPING AN EXPLANATORY CRITIQUE FROM ACCOUNTS OF EMPIRICAL REALITY 327

Alpesh Maisuria is a Senior Lecturer at the University of East London, United Kingdom.

"Alpesh Maisuria's engaging and important book provides a key contribution to contemporary Marxist research on how class is lived and on class struggle under neo-liberalism, by exploring these issues in Sweden - a country which has historically been strongly shaped by social democratic principles and ideals. Maisuria also contributes to Marxist and critical scholarship by developing a sophisticated theoretical framework synthesizing Gramsci and critical realism, which is intricately deployed through life history interviews."

"Alpesh Maisuria's book on Class Consciousness and Education in Sweden identifies how the system of education that has developed there has not only failed to provide either equality or empowerment for the mass of the population, despite its promises, it has also reflected an educational outlook of bourgeois socialism rather than radical reform. Based on a combination of Gramscian Cultural Marxism, Bhaskar's Critical Realism, and life history method, Maisuria's investigation identified quite simply that Sweden's education system was not empowering for the working classes, however much this was claimed to be the case. There was some pretence of this taking place, but universities, schools and educational curricula have continued to be developed in ways that reproduce bourgeois values and repress class consciousness within the working class, whose unacknowledged labour power was ironically exploited to set up the education system in the first place. Yet despite this the education system  is often considered to be a model of equity to be copied by other countries. Education is a weapon of class domination in Sweden just as much as it is in other capitalist countries. The book is very compulsory reading for my postgraduate students in Sweden, and I recommend it highly, especially at time of deepening crisis for social democracy and increasing relevance of Marxist analysis."

"This book could never have been more needed and more timely! With social democracy dying a slow death and the far-right rising and rising, especially in Europe but also elsewhere, one could be misled to believe this is all there is to politics. Thankfully Alpesh Maisuria sets the record straight, both from an educational and a sociological perspective.He reminds us about the struggles against fascism and the need for the re-awakening of class consciousness. His account through empirical material he meticulously collected from Swedish citizens, is a wake-up call to reality; if one is interested in understanding (and combating) inequalities, then they should look no further. And if one is wants to understand how education works in liberal democratic societies, then they will find a lot of answers in this tour de force of a book! I would expect the book to reach a wide audience and become essential reading for undergraduate and postgraduate courses alike, but to also attract considerable interest among scholars and readers of politics, education and sociology."

"This is a ground-breaking analysis, providing a bold critique of liberal education policy, and unsettling cosy assumptions about Nordic progressivism. A must read for those interested in education policy, race and social justice."