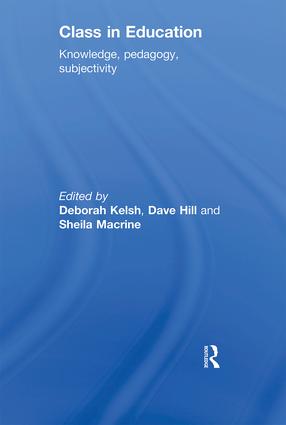 In contemporary pedagogy, "class" has become one nomadic sign among others: it has no referent but only contingent allusions to similarly traveling signs. Class, that is, no longer explains social conflicts and antagonisms rooted in social divisions of labor, but instead portrays a cultural carnival of lifestyles, consumptions, tastes, prestige and desire, or obscures social conflicts through technicist accounts of incomes and jobs.

Class in Education brings back class as a materialist analysis of social inequalities originating at the point of production and reproduced in all cultural practices. Addressing a wide range of issues – from the interpretive logic of the new humanities to racism to reading, school-level curricula to educational policy – the contributors focus on the effects that the different understandings of class have on various sites of pedagogy and open up new spaces for a materialist pedagogy and critical education in the times of globalization and the regimes of the digital.

Deborah Kelsh is an Associate Professor in the Department of Teacher Education at The College of Saint Rose in Albany, New York, US.

Dave Hill is Professor of Education Policy at the University of Northampton, UK.

Sheila Macrine is an Associate Professor in the Curriculum and Teaching Department at Montclair State University in New Jersey, US.