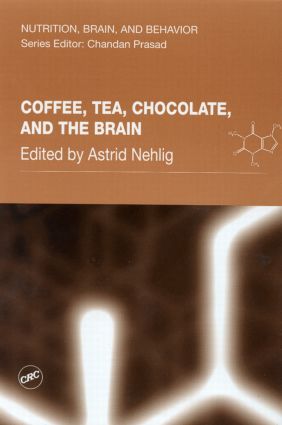 Coffee, Tea, Chocolate, and the Brain

Coffee, tea, and chocolate are among the most frequently consumed products in the world. The pleasure that many experience from these edibles is accompanied by a range of favorable and adverse effects on the brain that have been the focus of a wealth of recent research.

Coffee, Tea, Chocolate, and the Brain presents new information on the long-debated issue about the beneficial and/or potentially negative effects on the brain of the consumption of coffee, tea, and chocolate. With caffeine as the common component in these beverages and food, this volume features important data on the effects of caffeine on sleep, memory, cognition, mood, performance, and more. It also contains specific information on new directions of research on the effect of caffeine on Parkinson’s disease, seizures, ischemia, the stress axis, and brain development. Debate on the potential addiction to caffeine is included, as well as discussion of how chocolate and caffeine can induce or alleviate various types of headaches.

With contributions from world-renowned experts in the field, this up-to-date reference provides important information for scientists, researchers, industry professionals, and students involved in nutrition, neurology, neuropharmacology, clinical psychology, and other health-related sciences.

“… question the positive and negative effects on the brain (and on health in general) of the consumption of three methylxanthine-containing substances: either coffee, tea and – to a lesser degree – chocolate. … will be an important addendum for basic and clinical scientists, since most results on these problems and issues can usually be found only in academic journals and not often in books. The other positive point here is the presence of a detailed index. Apart from doctors and chemists, I also believe that many nutritionists, neurologists and perhaps most coffee drinkers could enjoy most of that reading; in fact, although it is an academic publication with graphs and tables, one will find many elements in every chapter that can be understood without a specialization in chemistry or in neuropharmacology.”

Mechanisms of Action of Caffeine on the Nervous System, John W. Daly and Bertil B. Fredholm

Age-related Changes in the Effects of Coffee on Memory and Cognitive Performance, Martin P.J. van Boxtel, and Jeroen A.J. Schmitt

Dependence Upon Coffee and Caffeine: An Update, Astrid Nehlig

Caffeine and Parkinson’s Disease, Michael A. Schwarzschild and Alberto Ascherio

Caffeine and Headache: Relationship with the Effects of Caffeine on Cerebral Blood Flow, Astrid Nehlig

The Biology and Psychology of Chocolate Craving, David Benton

Is There a Relationship between Chocolate Consumption and Headache?, Lidia Savi