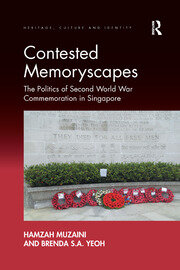 This book sets itself apart from much of the burgeoning literature on war commemoration within human geography and the social sciences more generally by analysing how the Second World War (1941–45) is remembered within Singapore, unique for its potential to shed light on the manifold politics associated with the commemoration of wars not only within an Asian, but also a multiracial and multi-religious postcolonial context. By adopting a historical materialist approach, it traces the genealogy of war commemoration in Singapore, from the initial disavowal of the war by the postcolonial government since independence in 1965 to it being embraced as part of national historiography in the early 1990s apparent in the emergence since then of various memoryscapes dedicated to the event. Also, through a critical analysis of a wide selection of these memoryscapes, the book interrogates how memories of the war have been spatially and discursively appropriated today by state (and non-state) agencies as a means of achieving multiple objectives, including (but not limited to) commemoration, tourism, mourning and nation-building. And finally, the book examines the perspectives of those who engage with or use these memoryscapes in order to reveal their contested nature as fractured by social divisions of race, gender, ideology and nationality.

The substantive book chapters will be based on archival and empirical data drawn from case studies in Singapore themed along different conceptual lenses including ethnicity; gender; postcoloniality, tourism and postmodernity; personal mourning; transnational remembrances and politics; and the preservation of original sites, stories and artefacts of war.

Collectively, they speak to and work towards shedding insights to the one overarching question: 'How is the Second World War commemorated in postcolonial Singapore and what are some of the issues, politics and contestations which have accompanied these efforts to presence the war today, particularly as they are spatially and materially played out via different types of memoryscapes?' The book also distinguishes itself from previous works written on war commemoration in Singapore, mainly by social and military historians, particularly through its adoption of a geographical agenda that gives attention to issues of politics of space as it relates to remembrance and representations of memory.

Contents: Introduction; The history of war remembrance in Singapore; ’Localizing’ war representations at the Changi Chapel and Museum; The reflections at Bukit Chandu and the politics of ’race’; ’Rescaling’ war memories at Kranji Cemetery and Memorial; Intimations of postmodernity at Fort Siloso as a site of dark tourism; Everyday war memories at the Old Ford Factory Museum (Moff); Memoryscapes of war in everyday public spaces in Singapore; Conclusions; Index.

Hamzah Muzaini is Assistant Professor, Cultural Geography Chair Group, Wageningen University in the Netherlands. Before entering academia, he was heritage consultant, and curator of the Changi Chapel and Museum, a site dedicated to the memory and remembrance of men and women who were incarcerated by the Japanese in Singapore during the Second World War. His research interests relate to war heritage and memoryscapes, conceptualised around postcolonial theory, materiality, and the spatial politics of power and resistance particularly by state and non-state actors in public and everyday spaces. He has also published on backpacking and 'dark tourism' in Southeast Asia, international peace and heritage museums, and Singapore's transborder geographies and histories. His present research looks at 'heritage from below' within the context of cultural theme parks, memory politics as played out in and through cyberspace, and on the urban spatialities of forgetting and immanence.

Brenda S.A. Yeoh is Professor (Provost's Chair), Department of Geography, as well as Dean of the Faculty of Arts and Social Sciences, National University of Singapore. She is also the Research Leader of the Asian Migration Cluster at the Asia Research Institute, NUS. Her research interests include the politics of space in colonial and postcolonial cities and she also has considerable experience working on a wide range of migration research in Asia, including key themes such as cosmopolitanism and highly skilled talent migration; gender, social reproduction and care migration; migration, national identity and citizenship issues; globalising universities and international student mobilities; and cultural politics, family dynamics and international marriage migrants. She has published widely in these fields. Her latest book titles include The Cultural Politics of Talent Migration in East Asia (Routledge 2012, with Shirlena Huang); Migration and Diversity in Asian Contexts (ISEAS press, 2012, with Lai Ah Eng and Francis Collins); Return: Nationalizing Transnational Mobility in Asia (Duke University Press, 2013, with Xiang Biao and Mika Toyota); as well as a paperback reprint of her book Contesting Space in Colonial Singapore: Power Relations and the Urban Built Environment (originally published in 1996 by Oxford University Press).