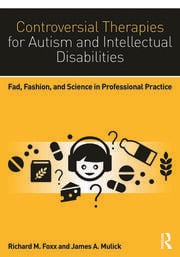 One of the largest and most complex human services systems in history has evolved to address the needs of people with autism and intellectual disabilities, yet important questions remain for many professionals, administrators, and parents. What approaches to early intervention, education, treatment, therapy, and remediation really help those with autism and other intellectual disabilities improve their functioning and adaptation? Alternatively, what approaches represent wastes of time, effort, and resources?

brings together leading behavioral scientists and practitioners to shed much-needed light on the major controversies surrounding these questions. Expert authors review the origins, perpetuation, and resistance to scrutiny of questionable practices, and offer a clear rationale for appraising the quality of various services.

The second edition of Controversial Therapies for Autism and Intellectual Disabilities has been fully revised and updated and includes entirely new chapters on psychology fads, why applied behavioral analysis is not a fad, rapid prompting, relationship therapies, the gluten-free, casein-free diet, evidence based practices, state government regulation of behavioral treatment, teaching ethics, and a parents’ primer for autism treatments.

Chapter 1: Where Do Fads Come From? by Stuart Vyse

Chapter 2: The Nature and Value of Empirically Validated Interventions by Crighton Newsom and Christine A. Hovanitz

Chapter 3: The Appeal of Unvalidated Treatments by Tristram Smith

Chapter 4: History of Fad, Pseudo-Scientific and Dubious Treatments in Intellectual Disabilities: From the 1800s to Today by John W. Jacobson, James A. Mulick, Richard M. Foxx and Elizabeth Kryszak

Chapter 7: Developmental Disabilities and the Paranormal by John W. Jacobson, Elizabeth Kryszak and James A. Mulick

Chapter 10: Fads and Controversial Treatments in Speech-Language Pathology by Cheryl D. Gunter and Mareile A. Koenig

Chapter 12: Helping Parents Separate the Wheat from the Chaff: Putting Autism Treatments to the Test by Shannon Kay

Chapter 13: A Map Through the Minefield:  A parent’s primer to find autism treatment that works! by Sabrina Freeman

Chapter 14: The Perpetuation of the Myth of the Nonaversive Treatment of Severe Behavior by Richard M. Foxx

Chapter 19: Nonaversive Treatment by Crighton Newsom and Kimberly A. Kroeger

Chapter 21: Pet Me, Sniff Me, Squeeze Me: Quack Treatment for Autism by Gerald P. Koocher and Erica Gill

Chapter 25: Why ABA is not a Fad, a Pseudo Science, a Dubious or Controversial Treatment, or Politically Correct by Richard M. Foxx

Chapter 27: The National Institute of Health Consensus Development Conference on the Treatment of Destructive Behaviors: A 25-Year Update of a Study in Hardball Politics by Richard M. Foxx

Chapter 30: State Government Regulation of Behavioral Treatment: The Good, the Bad, and the Ugly by Richard M. Foxx, Valeria LaCerra, Nina Carraghan, and Jessica A. Fedezko

James A. Mulick, Ph.D., is Professor in the Departments of Pediatrics and Psychology at The Ohio State University and a pediatric psychology expert at Nationwide Children’s Hospital in Columbus, Ohio. He received the 2009 John W. Jacobson Award for Critical Thinking from the American Psychological Association Division on Intellectual and Developmental Disabilities.

"This newly updated and revised volume represents a truly important contribution to the professions of education, psychology, medicine, and even law. Its rich case examples serve as classroom exercises for enhancing critical thinking and teaching scientific research design for behavioral scientists. By debunking problematic treatments that lack empirical support and contradicting social media fads, these experts advocate for enhanced scientific approaches that could lead to the improvement of services for children with autism and intellectual disabilities and their families."

"Whenever conventional medical treatments fail to provide satisfactory outcomes, patients seek alternative treatments. The field of intellectual disabilities is ripe for such alternatives, sometimes developed by well-intentioned health professionals and sometimes not. Foxx and Mulick and their chapter authors provide a thorough look at what is out there, where it came from, and the problems with many of these proposed treatments. This book should be in the office of anyone delivering care to individuals with autism and intellectual disabilities. It will help separate the wheat from the chaff in choosing treatments and in advising and counseling families seeking guidance."