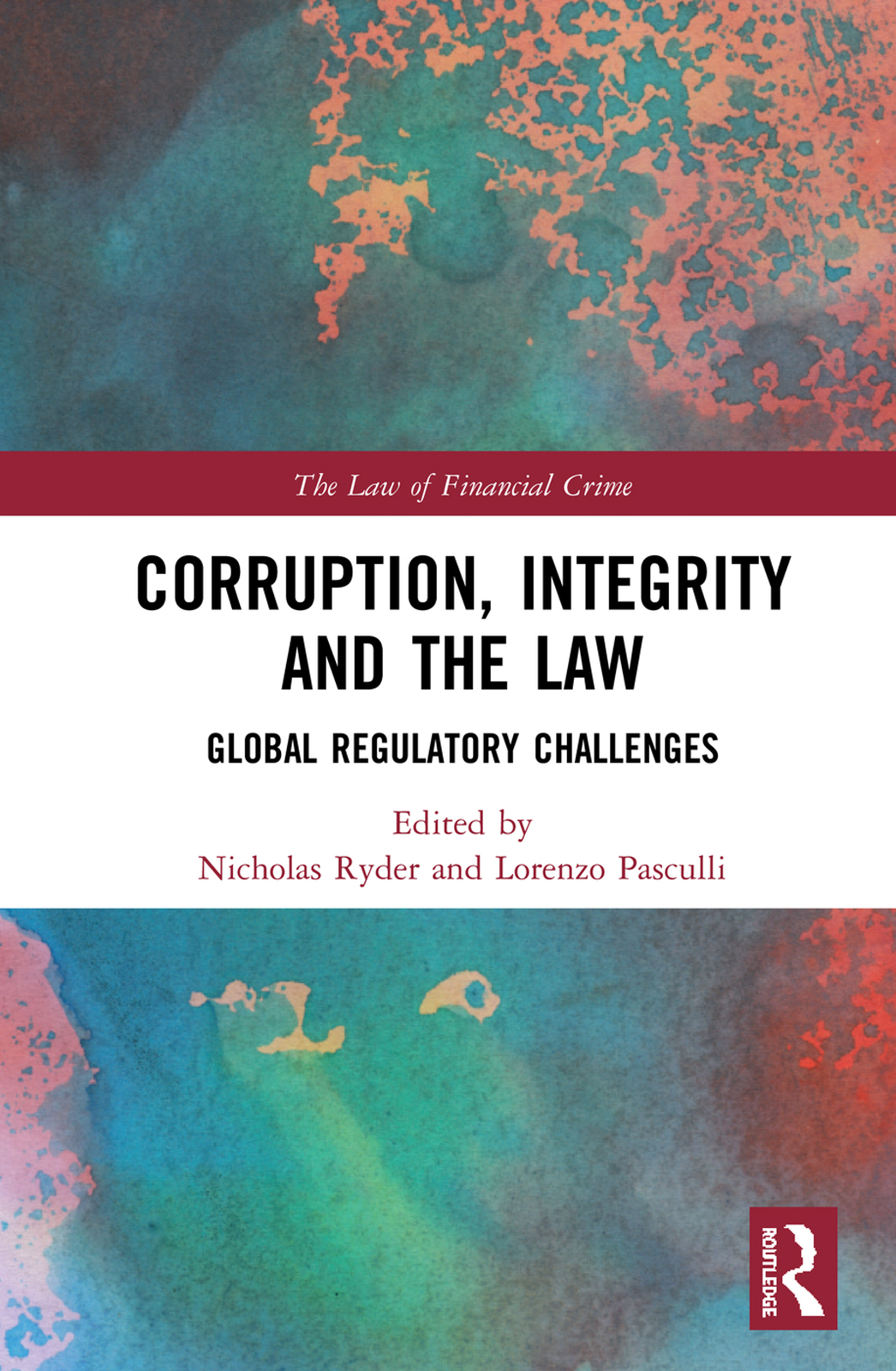 Corruption, Integrity and the Law

Globalisation has opened new avenues to corruption. Corrupt practices are proliferating not only within national borders but across different countries. Despite many national and international anti-corruption bodies and strategies, corruption far from being eradicated. There is an urgent global demand for a better understanding of corruption as a phenomenon and a thorough assessment of the existing regulatory remedies, towards the establishment of more effective (and possibly uniform) anti-corruption measures.

Our previous collection, Corruption in the Global Era (Routledge, 2019), analysed the causes, the sources, and the forms of manifestation of global corruption. An ideal continuation of that volume, this book moves from the analysis of the phenomenon of corruption to that of the regulatory remedies against corruption and for the promotion of integrity.

Corruption, Integrity and the Law

provides a unique interdisciplinary assessment of the global anti-corruption legal framework. The collection gathers top experts in different fields of both the academic and the professional world – including criminal law, EU law, international law, competition law, corporate law and ethics. It analyses legal instruments adopted not only at a supranational level but also by different countries, in the attempt of establishing an interdisciplinary and comparative dialogue between theory and practice and between different

legal systems towards a better global promotion of integrity. This book will be of value to researchers, academics and students in the fields of law, criminology, sociology, economics, ethics as well as professionals – especially solicitors, barristers, businessmen and public servants.

1 The future of anti-corruption: towards a global system of prevention and justice;
Lorenzo Pasculli and Nicholas Ryder;

2 The fight against international corruption: a call for a global approach in corporate criminal liability law and procedure;

3 What role does competition law have to play in the prosecution of financial crime in the UK?;

4 The contrast to corruption in the Italian legal system between repression and prevention;

5 Corruption, regulation and the law: the power not to prosecute under the UK Bribery Act 2010;

6 Justice deferred is Justice denied? The Jury’s out;

8 Financial sanctions as a weapon for combatting grand corruption;

10 Keep the canaries singing. Are whistle-blowers in Nigeria adequately protected?;

11 ‘Follow-ing the money’ ten years on: transparency and the fight against banking secrecy;

12 Information, power, and the fight against tax havens;

13 The communication of non-financial information according to the Directive 2014/95/EU as an instrument for the promotion of corporate integrity in Europe;

14 The fight and prevention against corruption: the case of Switzerland and implications for Swiss firms with business activities abroad;

15 The practice of anticorruption and integrity of government. On the moral learning side of the story;

is a professor in Financial Crime, Head of Research and Head of the Global Crime, Justice and Security Research Group at Bristol Law School, University of the West of England, Bristol, UK.

is Associate Head of School for Research at Coventry Law School and an associate of the Centre for Financial and Corporate Integrity at Coventry University, UK. He is also a visiting professor at Nebrija University, Spain.

The Law of Financial Crime

While a growing number of high profile financial crime cases have hit the headlines recently the topic of financial crime is also generating much attention amongst academics and practitioners. This series will be the first to be dedicated to the law of financial, or economic, crime and offers a platform for important and original research in this area.

Books in the series will cover traditional subjects of financial crime including money laundering, terrorist financing, fraud, market abuse, insider dealing, market manipulation, tax evasion, bribery and corruption. But broader legal and regulatory issues will also be covered as well as emerging areas of concern such as the risks to stability of the financial system posed by financial crime. Emphasis will be placed on comparative approaches to the subject considering legislation across a number of jurisdictions as well as international regulations where appropriate, giving the series a truly global outlook.

The titles in the series are primarily aimed at an audience of researchers, scholars and practitioners in the area but should also be of interest to policy makers, law enforcement agencies, financial regulatory agencies, as well as people employed within the financial services sector.