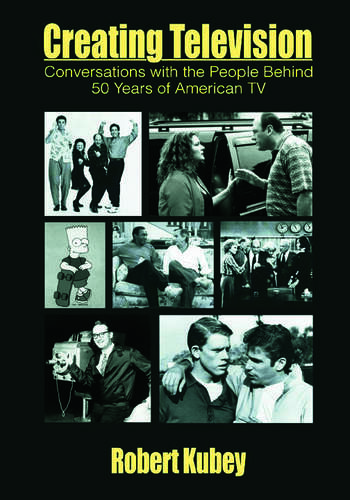 Creating Television: Conversations With the People Behind 50 Years of American TV

Creating Television brings television and its creators to life, presenting fascinating in-depth interviews with the creators of American TV. Having interviewed more than 100 television professionals over the course of his 15 years of research, Professor Robert Kubey presents here the 40 conversations that provide the most illuminating insights about the industry and the people working in it. These interviews bring television's creators to life, revealing their backgrounds, work, and thoughts about the audience and the television programs they create. Each interview tells a compelling tale of an individual's struggles and successes within a complex collaborative and highly commercial medium, offering readers rare insights on the human component in television's development.

Featured in this volume are actors, agents, writers, directors, producers, and executives, representing television's earliest days through to the present day. Spanning shows from I Love Lucy and The Tonight Show through to Seinfeld, The Simpsons, and The Sopranos, these creators share the stories of how they gained entry to the industry and built their careers, offering readers a rare opportunity to meet, up close, the people involved in creating many of the most famous and successful programs in the medium's history, and linking the creators' personal histories to the television programs they create.

"Creating Television, [is] a superb collection of insightful interviews with many of television's top creators...this book is required reading."
—Journal of the Caucus for Television Producers, Writers, and Directors

"You would not think they would bite the hand that feeds them, but they do, and very eagerly. Kubey clearly has the credentials for producing this masterwork. But he also knows how to coax candid interviews out of TV professionals, and knows how to tell a story to others. Unlike many scholars, he knows how to make this journey universally appreciated and engrossing for all to read. In fact, everyone interested in television will find his work innovative, instructive, and utterly fascinating--in a word, superb."

"Kubey has completed an enormous task, which included not only securing interviews with numerous interesting, accredited, recognizable and stimulating people, but also tracking most of them down years later to complement their first sessions. This book is exactly what it claims to be --- a book of conversations with some of television's most influential people, many of whom operate best behind the scenes and under the radar, as mere credits at the end of our favorite television programs."

"Robert Kubey...has written a book that will also appeal to a broader audience. Anyone who watches television, especially those who grew up while television was maturing, will find this look at the inside of television as told by television insiders fascinating and insightful."
—Journal of Mass Communication Quarterly

"In this new book, Kubey has made a major contribution. This is not a dry academic book. Because television is such a collaborative medium, we learn, through the interviews, how important decisions got made. A terrific resource for media educators who need behind the scenes insights."
—Barry Duncan
Barry's Bulletin

"In Creating Television, Robert Kubey, long known for his thought-provoking and innovative ways of thinking about the media, describes an industrialized creative process by talking with forty people who are a part of it. Taken together, these interviews provide a clear picture of how ideas and programs are assembled....Recognizing both the polyauthorial nature of television and the fact that individuals, not corporations, make the programs we watch, Kubey offers a significant contribution to the emerging field of television studies."
—Robert Thompson
Director, Center for the Study of Popular Television, Syracuse University

"Few tribes are as strange, or talented, as the people who make TV. Robert Kubey has penetrated the world behind the tube and coaxed candid, revealing interviews from a wide range of successful players. Anyone who wants to understand the reality of making television would be fortunate to have him as their Sherpa and this book as their field guide."
—Martin Kaplan
Director, The Norman Lear Center; Associate Dean, USC Annenberg School for Commu

"Entertainment Tonight...Access Hollywood...The E! True Hollywood Story...Inside TV Land: television these days spends a lot of time examining itself. Still, most viewers know comparatively little about the complex workings of creativity in this medium. Millions of people who never read Oliver Twist could tell you who wrote it but couldn't name the creators of Friends, which they watch every week...."
—Entertainment Tonight

"This is a masterful and unprecedented voyage into the minds of some 40 of television's most important, thoughtful and creative forces, thanks to Robert Kubey's insightful interviews. Never before has television's vital human capital--people representing all of the key roles in the industry over a 50-year period, from writers and producers to actors, directors, even agents--been cross-examined to such useful and impressive ends. Professor Kubey, with a scholar's deft touch, proves that television is more than a message or an industry, but most critically the creative work of the people behind the box. Anyone remotely interested in television will find this book instructive and inspiring."
—Everette E. Dennis
Felix E. Larkin Distinguished Professor of Media & Entertainment Industries, For

"'Creating Television' is a natural for my 'TV Programming Strategies and Practices' course. Combined with lecture material and up-to-date reading packets, the book helps students understand how the creative process works in television, and how the network programmers, for good and ill, have influenced what we see. I believe the book would add immeasurably to any course dealing with the creative process, and the bureaucracies that influence the outcomes of that process. Plus, it's a fun read."
—Roger Cohen
Prof. Emeritus, Rutgers University

"The voices and activities of media producers are too often absent from academic writing about media and communications. But, as Professor Kubey is well aware from his work on media literacy, literacy must encompass writing as well as reading. These interviews with television workers are a fascinating record of some of the key shapers of our popular culture over the last five decades. The interview format is respectful, critical and illuminating. This book will be a valuable and necessary addition to the growing academic field of media production studies both in the USA and internationally."
—Maire Messenger Davies
School of Journalism, Media & Cultural Studies, Cardiff University, United Kingd

The first core concept of media literacy is "All media are constructed." So who makes the media we so avidly consume? In Creating Television: Conversations with the People Behind 50 Years of American TV, media literacy researcher Robert Kubey introduces us to 40 of the most significant actors, agents, writers, directors, producers, and executives who have created TV since the early 1950s. Through compelling verbatim interviews,Creating Television provides an unprecedented look inside the strange mix of artistic collaboration and cutthroat competition that is the U.S. television industry. Absorbing and insightful, it's a creative classroom resource!
—Elizabeth Thoman
The Center for Media Literacy, Los Angeles