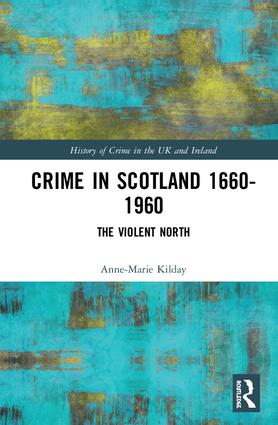 Scotland has often been regarded throughout history as "the violent north", but how true is this statement? Does Scotland deserve to be defined thus, and upon what foundations is this definition based? This book examines the history of crime in Scotland, questioning the labelling of Scotland as home to a violent culture and examining changes in violent behaviour over time, the role of religion on violence, how gender impacted on violence and how the level of Scottish violence fares when compared to incidents of violence throughout the rest of the UK.

This book offers a ground-breaking contribution to the historiography of Scottish crime. Not only does the piece illuminate for the first time, the nature and incidence of Scottish criminality over the course of some three hundred years, but it also employs a more integrated analysis of gender than has hitherto been evident. This book sheds light on whether the stereotypical label given to Scotland as 'the violent north' is appropriate or in any way accurate, and it further contributes to our understanding of not only Scottish society, but of the history of crime and punishment in the British Isles and beyond.

"Are the Scots violent? This fascinating study explores Scottish identities using a rich mix of historical court records, parliamentary papers, and contemporary newspapers. The book gets behind cultural representations to explore the reality of life, crime, and violence. It will be a great addition to our understandings of Scotland and its long and rich history."

"Professor Kilday's book is a landmark study. Based on an impressive array of original sources, it is the first to examine Scottish criminality in such depth and range over three centuries of time.In the process, myths are punctured and orthodoxies undermined - a seminal volume by any standards."

"This important book advances our understanding of the prosecution and punishment of violent crime, by providing a much needed long-term perspective on the ways in which crimes such as assault, sexual violence, communal violence and homicide, have been dealt with. In addition, Kilday’s study makes a significant contribution to our knowledge of crime and criminal justice in Scotland."

"Was Scotland a violent nation? Based on an unprecedented longitudinal analysis of court records over three centuries, this study combines quantitative data with detailed case studies to challenge existing stereotypes and present a nuanced account of the nature and extent of violent crime in Scotland’s past."

- Professor Robert Shoemaker, Department of History, The University of Sheffield

The Violent North - Fact or Fiction: Introduction and Context

History of Crime in the UK and Ireland