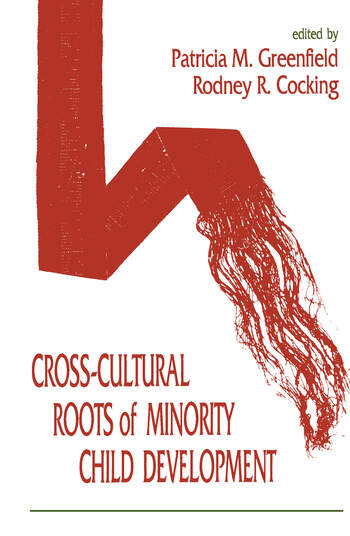 This book constitutes the first time in the field of developmental psychology that cross-cultural roots of minority child development have been studied in their ancestral societies in a systematic way--and by an international group of researchers. Most child development and child psychology texts take cultural diversity in development into account only as an addendum or as a special case--it is not integrated into a comprehensive theory or model of development. The purpose of this text is to redress this situation by enlisting insiders' and outsiders' perspectives on socialization and development in a diverse sampling of the world's cultures, including developing regions that often lack the means to speak for themselves in the arena of international social science.

The unique feature of this text is the paradigm. For the minority groups represented, the questions focused on how development was behaviorally expressed within the culture of origin and in new societal contexts. Thus, developmental issues--such as language and mother-child interactions--for African-American children are considered in the United States as well as in the African culture of origin and in France as a country of immigration. This paradigm is considered for African and Asian cultures and the Americas, including Hispanics from Mexico as well as Native Americans.

These questions not only provide the unifying theme of this unique book but also a model for conceptualizing multi-culturalism within a unified framework for developmental psychology.

"...an excellent source for gaining information regarding the socialization and development of the minority groups....present[s] useful information which can help graduate students in the social sciences, developmental, educational, clinical and school psychologists, and researchers to give more credence to the impact of culture on development and socialization in their respective fields of work. This book would be appropriate for courses that have a focus on multicultural aspects, such as race and ethnicity, educational aspects of minority groups, and mental health courses addressing appropriate interventions."
—Cultural Diversity and Mental Health

"...effectively brings together theory and research findings on child development within various cultural groups. In practical terms, this volume enables those interested in cross-cultural research to obtain useful information about similarities and dissimilarities within and across groups, from one source. Additionally, the book serves to stimulate interest in the field and leads the reader to question previously held assumptions and beliefs about culture and the manner in which cross-cultural research is conducted....this volume makes an important contribution to the field of developmental psychology and to the study of minority child development. It is encouraging for those trying to advance cross-cultural research and informative for those wanting to learn more about diverse groups in a pluralistic society."
—Journal of Applied Developmental Psychology

"Greenfield and Cocking...provide a useful framework for examining the influence of cultures in contact on learning and cognitive development....the volume meets the editors' goals of contributing to a cultural-historical approach and to a theory of development that reaches beyond Euro-American norms. The collection has breadth."
—Mind, Culture, and Activity

"Not since the turn of the century has it been so important for those who study and work with children to recognize the impact of cultural history, the reason for migration, the migratory experience itself, and the experience of integration into the host society by the family. All of these concepts are crucial to understanding the cross-cultural roots of minority child development. This book is an excellent beginning."
—American Journal of Mental Retardation

"The editors are to be applauded for bringing together a stunning range of locales and settings and a highly competent group of international scholars."
—Comparative Education Review