Crowdsourcing for Filmmakers
Indie Film and the Power of the Crowd 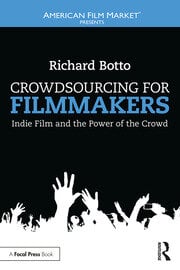 Crowdsourcing for Filmmakers: Indie Film and the Power of the Crowd

Whether you’re a producer, screenwriter, filmmaker, or other creative, you probably have a project that needs constant exposure, or a product to promote. But how do you rise above the noise?

In Crowdsourcing for Filmmakers: Indie Film and the Power of the Crowd, Richard Botto explains how to put crowdsourcing to use for your creative project, using social media, networking, branding, crowdfunding, and an understanding of your audience to build effective crowdsourcing campaigns, sourcing everything from film equipment to shooting locations.

Botto covers all aspects of crowdsourcing: how to create the message of your brand, project, or initiative; how to mold, shape, and adjust it based on mass response; how to broadcast a message to a targeted group and engage those with similar likes, beliefs, or interests; and finally, how to cultivate those relationships to the point where the message is no longer put forth solely by you, but carried and broadcasted by those who have responded to it. Using a wealth of case studies and practical know-how based on his years of experience in the industry and as founder of Stage 32—the largest crowdsourced platform for film creatives—Richard Botto presents a comprehensive and hands-on guide to crowdsourcing creatively and expertly putting your audience to work on your behalf.

Chapter 1: Allow Myself To Introduce...Myself

Chapter 2: Let’s Get One Thing Out of the Way Immediately

Chapter 3: So What The Hell Is Crowdsourcing Anyway?

Chapter 4: A Most Excellent Crowdsourcing Adventure

Chapter 5: The Moment of Truth: My Definition of Crowdsourcing

Chapter 6: Why Should We Crowdsource? (Will You Whistle for Me?)

Chapter 9: What Word In Social Media Don’t You Understand?

Chapter 10: Taking it To The Streets – Networking Offline

Chapter 12: Crowdfunding – Get Your Money For Nothin’ and Your Chicks For Free

Richard "RB" Botto is the founder & CEO of Stage 32 (stage32.com), the world’s largest online platform for connecting and educating film creatives. Called "LinkedIn for film creatives" by Forbes, Stage 32 boasts a half million members and over 1,000 hours of education. Prior to Stage 32, Botto was the founder, publisher and editor of Razor Magazine, a national men’s lifestyle magazine, which had a readership of 1.5 million at its peak. Botto is also an actor, producer and screenwriter. His latest screenplay, The End Game, is in production at Covert Media. Botto is a much sought-after speaker, teaching and mentoring around the world. He has also appeared on such networks as Fox News, CNBC, CBS News, MSNBC and Bloomberg, speaking on the subjects of social media, networking, crowdsourcing, crowdfunding, screenwriting, business, entrepreneurial practices, and more.

"Crowdsourcing for Filmmakers should be required reading for every film school, drama school and even business school in the country. And if you're like me, a filmmaker and writer who has already released several projects, the book will teach you new techniques and reinforce tried-and-true strategies to propel yourself forward. It's a must-read textbook and guide that you should have at your disposal, and I highly recommend it."

"I cannot imagine a better match than Richard Botto writing about crowdsourcing for filmmakers in the digital age. RB is masterful in his knowledge of the digital space and attracting an audience, as he's shown with Stage 32, and this is the next logical step: applying that expertise to making successful films, which is one of the most important things to learn for breaking into today's and tomorrow's entertainment industry."
—Dean Silvers, Lawyer; Author of Secrets of Breaking into the Film & TV Business; Producer of Story of Thursday, and David O. Russell's Flirting with Disaster and Spanking the Monkey

"Fact: No one knows crowdsourcing better than RB. And now, all of his unparalleled knowledge and detailed case studies are packed together into a single volume –– Crowdsourcing for Filmmakers. From gathering feedback and ideas to piecing together film crews and connecting with an audience, this book will without a doubt become an invaluable resource in every filmmaker's journey from script to screen."

"Crowdsourcing for Filmmakers should be required reading for any writer, director, or producer looking to build a career as a filmmaker. The book is a perfect encapsulation of the expertise RB developed through founding and growing Stage 32; it couldn’t be more relevant to the world of independent film."

"As a subject matter expert as well as someone who has lived it, RB has a massive amount of wisdom to impart throughout Crowdsourcing for Filmmakers that enables entertainment industry participants to build and take advantage of their personal and social media networks to reach their goals."

"Comparing the power of moving your existing contacts to crowdsourcing a targeted audience is like comparing the power of mobilizing a small village to the power of potentially moving the universe. Rich Botto’s Crowdsourcing for Filmmakers shows how hard work and planning will greatly help today’s filmmaker take part in what is a new revolution. RB shows clearly that the power is in you, and that power can be harnessed by learning the lessons in this amazing book."

"Filmmaking has changed dramatically since I started Raindance in 1992. Film funding has completely changed. Some would argue for the worse. Not Richard Botto and his essential Crowdsourcing for Filmmakers which clearly and completely outlines the social media (and other) strategies used by successful crowdsourcers to make their movies happen. Richard writes in a matter-of-fact tone that his hundreds of thousands of followers will instantly recognize for its warmth, wit and wisdom. This book is like having Richard Botto and his years of experience in your back pocket 24/7. Indispensible."

"Sourcing and moving a crowd has never been a bigger factor in the life of an indie filmmaker. With Crowdsourcing for Filmmakers, RB has written a next-level and engaging discourse on the subject that will help so may achieve their artistic endeavors."

"I learned so much from Crowdsourcing for Filmmakers. Rich Botto has crafted an easy to grasp resource with definitive steps on how to best access a community and get your films made. This is essential reading."

"No one is more dedicated to educating filmmakers to learn and prosper in today's rapidly changing landscape than Richard Botto. He is successfully helping filmmakers move towards a newer, more global and digital era of filmmaking. In Crowdsourcing for Filmmakers he has introduced an important tool for filmmakers to help achieve maximum engagement - not just on their films, but on themselves. Read this book!"

"Crowdsourcing for Filmmakers is a must in the new era of filmmaking as the traditional models have begun to die out. And there is no one who understands the future of the business and where it is headed more than RB."

"The independent film landscape continues to change at a rapid rate. It is no longer good enough simply to be a filmmaker, you have to know the brand of your film and the brand of you. With Crowdsourcing for Filmmakers, Rich Botto provides a clear road map, using both time tested and innovative techniques designed to help you build an army of support for your project from conception to distribution and beyond."

"Given the hundreds of thousands of creatives on Stage 32, Rich Botto certainly knows how to source a crowd. In Crowdsourcing for Filmmakers, RB takes his wealth of knowledge and lessons learned and passes them on to the independent filmmaker. This could not be a more book for the "now" and should be essential reading for anyone making films in today's environment."

"It’s almost impossible to crowdfund without the crowd. You've gotta crowdsource FIRST. Before you can convert strangers into motivated fans to champion your artrepreneurial dreams, you’ve gotta start by authentically engaging friends, family and acquaintances to create tipping point momentum. No one is better at identifying and charismatically catalyzing aspirants into a branded community than RB. If you’re an independent filmmaker or content creator looking to make your creative and career dreams come true, RB’s insights will help you blueprint your plan. It’s up to you to put it into action and make it happen."

—Heather Hale, Author, How to Work the Film & TV Markets and Story$elling: How to Develop, Market and Pitch Film & TV Projects

"Richard Botto is my favorite sort of guy: The type of guy who went out and figured it out for himself, unearthing information wherever he could, and making good use of it at every turn. In Crowdsourcing for Filmmakers, RB shares the priceless knowledge he has gathered along the path to becoming an industry trailblazer, generously imparting on the reader with the sort of fundraising and crowdsourcing information on the shoulders of which projects can get made and careers will be built. "

"What sets great filmmakers apart is their understanding that they need an army of support. With Crowdsourcing for Filmmakers, RB has written the definitive guide on how to drum up support and get your audience to engage in you and your project."

—Agustine Calderon, Development Executive & Producer (In the Company of Lies)