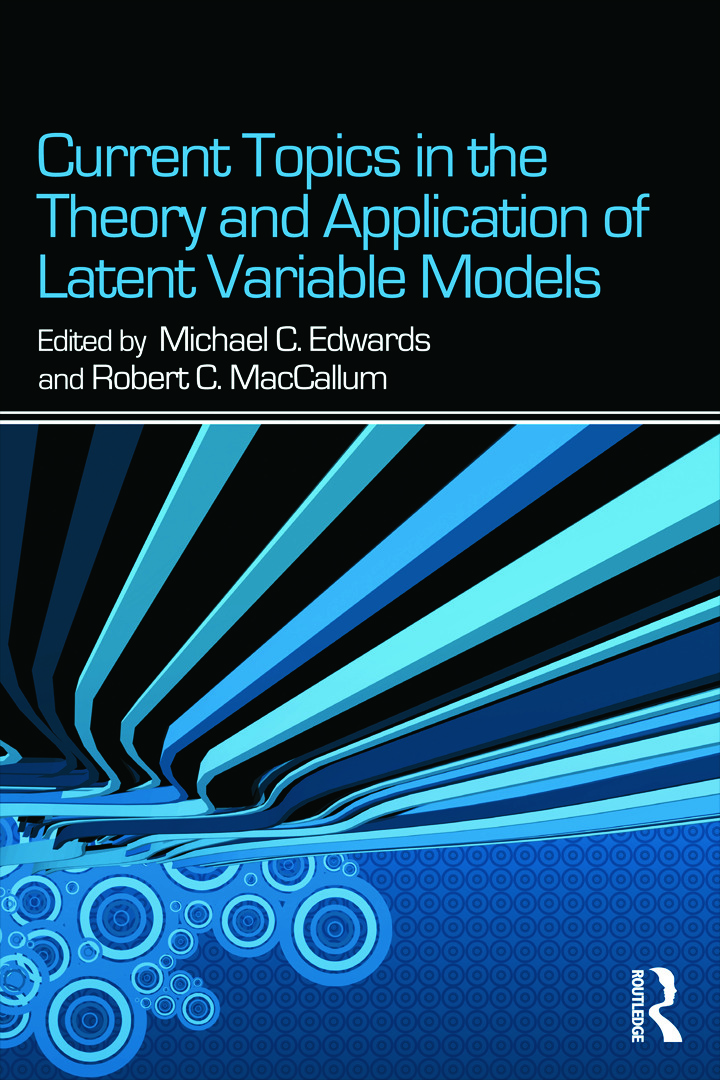 Current Topics in the Theory and Application of Latent Variable Models

This book presents recent developments in the theory and application of latent variable models (LVMs) by some of the most prominent researchers in the field. Topics covered involve a range of LVM frameworks including item response theory, structural equation modeling, factor analysis, and latent curve modeling, as well as various non-standard data structures and innovative applications.

The book is divided into two sections, although several chapters cross these content boundaries. Part one focuses on complexities which involve the adaptation of latent variables models in research problems where real-world conditions do not match conventional assumptions. Chapters in this section cover issues such as analysis of dyadic data and complex survey data, as well as analysis of categorical variables. Part two of the book focuses on drawing real-world meaning from results obtained in LVMs. In this section there are chapters examining issues involving assessment of model fit, the nature of uncertainty in parameter estimates, inferences, and the nature of latent variables and individual differences.

“This fine collection of papers is a fitting tribute to Michael Browne, one of the giants of contemporary psychometrics. Readers interested in latent variable models are sure to enjoy this valuable edited volume.” - Kenneth A. Bollen, University of North Carolina- Chapel Hill, USA

“This exciting volume adds impressively to the structural equation modeling literature by giving top contributors in our field a new forum for presenting their current thinking about pressing issues." - John R. Nesselroade, University of Virginia, USA

“An inspiring book on latent variable modeling in honor of a great man and scientist. It offers an excellent sample of new applications and methodologies, an enjoyable snapshot of an important and expanding field.” – Paul de Boeck, University of Amsterdam, the Netherlands

“This book will be a significant contribution to the field and I am enthusiastic about its publication. … The editors … recruited a strong list of contributors. …This book would be appropriate for advanced graduate students, [and] applied researchers … and … statisticians. It could be used in conjunction with a more general text for a … course on structural equation modeling.” – Jason T. Newsom, Portland State University, USA

“The range of topics … [will] be of interest to researchers and graduate students. … [It] represents a considerable contribution to the literature on latent variable modeling. …. It draws on the expertise of a number of well-known researchers in the field."- Ronald H. Heck, University of Hawaii at Manoa, USA

Michael C. Edwards is an Associate Professor in the Quantitative Area of the Department of Psychology at The Ohio State University. He received his PhD in 2005 from the L.L. Thurstone Psychometric Laboratory at the University of North Carolina at Chapel Hill. His research focuses on measurement issues in the social sciences with specific topics including multidimensional item response theory, computerized adaptive testing, local dependence, and measurement invariance.

Robert C. MacCallum is Professor Emeritus of Psychology at both the University of North Carolina at Chapel Hill and Ohio State University. He received his graduate training at the University of Illinois and then spent 28 years on the faculty in the Quantitative Psychology program at Ohio State University, moving to UNC in 2003. His research interests focus on methods for analysis and modeling of correlational and longitudinal data, including factor analysis, structural equation modeling, and latent curve models. Within these areas he has worked on various issues including model estimation and evaluation, power analysis for testing models, and the nature and management of sources of error in modeling. His current interests involve the study of uncertainty inherent in results of statistical models. He is former Director of the L. L. Thurstone Psychometric Laboratory at UNC, and former president of the Society for Multivariate Experimental Psychology. In 2011 he received the Samuel J. Messick Award for distinguished scientific contributions from Division 5 of the American Psychological Association.