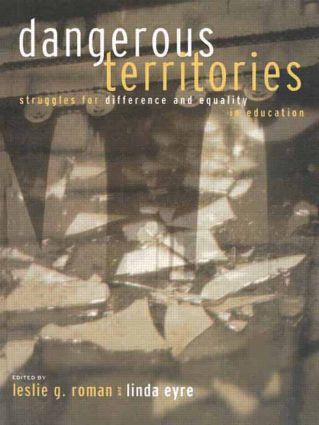 Struggles for Difference and Equality in Education, 1st Edition

With the recent conservative retrenchment, educational institutions have witnessed a backlash against the gains made by feminist and antiracist activists. Dangerous Territories examines higher education as one site of this backlash, at the same time challenging the binary framing of discourse as "reactionary" vs. "progressive," or Right vs. Left. Contributors are scholars working within and across a variety of disciplines including law, history, sociology, education, literature, women's studies, queer theory, cultural politics and postcolonialism.

"I highly recommend this book to anyone interested in critical pedagogy and democratic education." -- Canadian Woman Studies

"This timely collection of essays pushes the current equality and difference debates to a new plane. It creates an alternative to the polemics of political correctness, particularly in universities, by foregrounding issues to which progressive educators ought to pay attention." -- Roxana Ng, Department of Sociology in Education, University of Toronto

"Dangerous Territories intends to trouble the State, queer the academy, and decenter the very colonialisms that surround and organize our classrooms. It brilliantly disrupts the Left-Right binary, complicates the notion of "backlash," and excavates notions of nation, immigrant, "race," and ethnicity…This volume is simply a gift of intellectual reflection, community, and conscience to those of us putting out fires on our campuses, in our schools and beyond." -- Michelle Fine, Department of Psychology, City University of New York, Graduate Center

"This book gives us an ingenious interdisciplinary look at the legal, political, and social dilemmas that so powerfully affect educational institutions at the troubled end of the 20th Century." -- Regina Graycar, Dunhill Madden Butler Chair of Women and the Law, University of Sydney, Australia

"Dangerous Territories provides stimulating resources for developing and sustaining a broad vision of radical democracy and how to achieve it in higher education in these days of new forms of both right-wing politics and liberatory social movements…There are insights and strategies here for every teacher, scholar and researcher in higher education." -- Sandra Harding, University of California, Los Angeles

"[The contributors'] contesting voices, debates, and thoughtful provocations enable readers to think freshly about what positions should count as 'Left' and 'Right' these days, which multiculturalisms are politically regressive, the complicity of some feminisms with anti-democratic tendencies, how state power organizes political discourses within higher education, the difficulties and successes of pro-democratic alliances, and a host of other issues that shape curricula, pedagogies, classroom dynamics, employment, and 'neutral' educational policies. There are insights and strategies here for every teacher, scholar and researcher in higher education." -- Sandra Harding, University of California, Los Angeles

"This is a book by and about progressive educators working 'in the margins' of the traditionally-defined academic structure, in feminism/feminist theory, people-of-color theory, queer theory, cultural critique, class analysis, or other oppositional frameworks. It is a book which everyone, regardless of their politics, should read as they attempt to make connections between the classroom and the world at large." -- Maureen Shannon Salzer Rocky Mountain Review

"Roman and Eyre bring together an impressive array of international scholars from varied disciplines who detail in vivid and disturbing terms the intersections of power, discourse, and social structure in learning contexts…It [Dangerous Territories] provides fertile terrain for further exploring the implications of desire and its lived practices of incorporation within and through globalizing discourses, institutional pedagogies,and curiculum theory." -- SIGNS, Autumn 2000. keeping with Roman and Eyre's overall counterhegemonic educational project, the seventeen contributing authors mappostwar socioeducational experiences as a series of episodes fframe

co-author Views Beyond the Border Country: Raymond Williams and Cultural Politics (Routledge, 1993). Linda Eyre is Associate Professor in the Department of Curriculum and Instruction, University of New Brunswick.