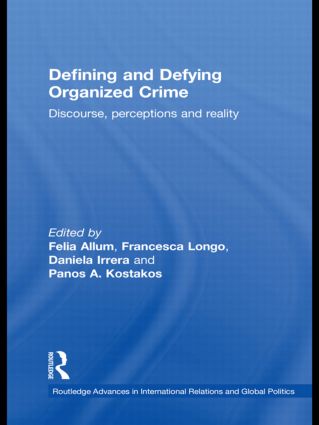 Organized crime is now a major threat to all industrial and non-industrial countries. Using an inter-disciplinary and comparative approach this book examines the nature of this threat. By analysing the existing, official institutional discourse on organized crime it examines whether or not it has an impact on perceptions of the threat and on the reality of organized crime.

The book first part of the book explores both the paradigm and the rationale of policy output in the fight against organized crime, and also exposes the often ‘hidden’ internal assumptions embedded in policy making. The second part examines the perceptions of organized crime as expressed by various actors, for example, the general public in the Balkans and in Japan, the criminal justice system in USA and circles within the international scientific community. Finally, the third part provides an overall investigation into the realities of organized crime with chapters that survey its empirical manifestations in various parts of the world.

This book will be of interest to students and scholars of international relations, criminology, security studies and practitioners.

List of contributors Foreword by Monica den Boer Acknowledgements Figures and tables Introduction: deconstruction in progress: towards a better understanding of organized crime? - Felia Allum and Panos A. Kostakos Part I : Discourse and Definitions 1. Discoursing organized crime: towards a two level analysis? - Franecesca Longo 2. The criminal not the crime: practitioner discourse and the policing of organized crime in England and Wales - Clive Hartfield 3. The evolution of the European Union’s understanding of organized crime and its embedment in EU discourse - Helena Carrapico 4. International policy discourses on transnational organized crime: the role of an international expertise - Amandine Scherrer Part II: Perceptions 5. Transnational Organized Crime and the Global Security Agenda: Different Perceptions and Conflicting strategies? - Daniela Irrera 6. Evolving perceptions of organized crime: the use of RICO in the United States - Joseph Wheatley 7. The Yakuza and its perceived threat - Sayaka Fukumi 8. The social perception of organized crime in the Balkans: a world of diverging views? - Jana Arsovska and Panos A. Kostakos Part III: Reality 9. The fire behind the smoke: the realities of human trafficking in Northern Ireland - Louise Deegan 10. Organized crime in transition-era Bulgaria: the elites and the state - Marina Tzevtkova 11. Organized crime and local politics in contemporary Italy: willing or unwilling bedfellows? - Felia Allum 12. The crime-terror nexus: do threat perceptions align with ‘reality’? - Tamara Makarenko Conclusion: Getting to grips with the deconstruction of organized crime - Francesca Longo and Daniela Irrera

Felia Allum is Lecturer in Politics and Italian at the University of Bath, UK. She is co-editor of Organized Crime and the Challenge to Democracy (also published by Routledge).

Francesca Longo is Professor of Political Science and Jean Monnet Professor of European Union Public Policy at the University of Catania, Italy

Daniela Irrera is Assistant Professor of International Relations at the University of Catania, Italy.

Panos A. Kostakos is a doctoral candidate at the University of Bath, UK