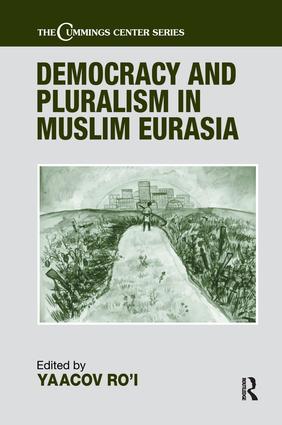 Democracy and Pluralism in Muslim Eurasia

This book is devoted to the study and analysis of the prospects for democracy among the Muslim ethnicities of the Commonwealth of Independent States (CIS), both those that have acquired full independence and those remaining within the Russian Federation. The nineteen Western academics and scholars from the Muslim countries and regions of the CIS who contribute to this volume view the establishment of democratic institutions in this region in the context of a wide and complex range of influences, above all the Russian/Soviet political legacy; native ethnic political culture and tradition; the Islamic faith; and the growing polarity between Western civilization and the Muslim world.

Part 1: Historical Background 1. The Democratic Tradition of Kazakhstan in Historical Context 2. Elements of Democracy in Dagestan on the Eve of the Russian Conquest 3. The Challenge of Belonging: The Muslims of Late Imperial Russia and the Contested Terrain of Identity and Gender 4. The Hidden Dialogue on Constitutionalism between the Russian Provisional Government and the Khivan Democracy in 1917 Part 2: Potential Pressure Points 5. Aid and Ideas: The Impact of Western Economic Support on the Muslim Successor States 6. Islam in the FSU: An Inevitable Impediment to Democracy? Part 3: Muslim Successor States 7. Authoritarian Pathways in Central Asia: A Comparison of Kazakhstan, the Kyrgyz Republic and Uzbekistan 8. The Formation of Political Parties and Movements in Central Asia 9. The Price of Stability: Kazakhstani Control Mechanisms under Conditions of Cultural and Demographic Bipolarity 10. Liberalization in Kyrgyzstan: 'An Island of Democracy' 11. Political Clans and Political Conflicts in Contemporary Kyrgyzstan 12. Linguistic Policy and the Process of Democratization in Uzbekistan 13. Opposition in Tajikistan: Pro et contra 14. Democracy and Civil Society Building in Independent Azerbaijan: Irrevocable Changes or Temporary Diversion? Part 4: Muslim Regions of the Russian Federation 15. Post-Soviet Tatarstan: Democratic Strains in the Ideological Evolution of the Tatar National Movement 16. Nation-Building and Minority Rights in Post-Soviet Russia: The Case of Bashkortostan 17. The Political Process in Dagestan: Prospects for Democracy Part 5: Democracy and Pluralism in Muslim Eurasia 18. Ethnic Relations and Democratic Transition in the North-Western Caucasus 19. Democratic Values and Political Reality in Chechnya, 1991-1999

Yaacov Ro'i is Professor of History at Tel Aviv University. He has served as Director of the Cummings Center for Russian and East European Studies and has been a visiting fellow at St. Antony's College, Oxford, the Kennan Institute, and Visiting Professor at Georgetown University. He is the editor of Muslim Eurasia: Conflicting Legacies (1995) and the author of Islam in the Soviet Union from World War II to Gorbachev (2000) and Islam in the CIS: A Threat to Stability? (2001).