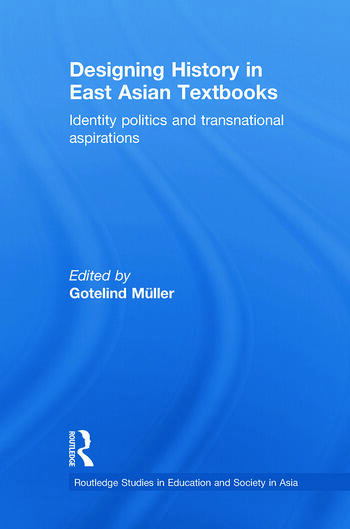 This book analyses the efforts throughout East Asia to deploy education for purposes of political socialization, and in particular in order to shape notions of identity. The chapters also examine the trend of ‘common textbook initiatives’, which have recently emerged in East Asia with the aim of helping to defuse tensions arguably fuelled by existing practices of mutual (mis)representation. These are analysed in relation to the East Asian political context, and compared with previous and ongoing endeavours in other parts of the world, particularly Europe, which have been keenly observed by East Asian practitioners. Written by a group of international education experts, chapters discuss the enduring focus on the role of curricula in inculcating homogenous visions of the national self, and indeed homogenized visions of significant 'others'.

Including contributions from scholars and curriculum developers involved personally in the writing of national and multi-national history textbooks this book will be of interest to students and scholars of Asian education, Asian history and comparative education studies.

Introduction Gotelind MÜLLER  I CONTESTING EAST ASIA, IDENTITIES AND EDUCATION: HISTORICAL CONTINGENCIES  1 The predicament of compiling textbooks on the history of East Asia SUN Ge  2 Teaching ‘the others’ history’ in Chinese schools: the state, cultural asymmetries, and shifting images of Europe (1900 to today) Gotelind MÜLLER  3 The construction of ‘self’ and Western and Asian ‘others’ in contemporary Japanese civics and ethics textbooks Klaus VOLLMER  4 Learning to love the motherland: ‘National Education’ in post-retrocession Hong Kong Edward VICKERS  5 Telling histories of an island nation: the academics and politics of history textbooks in contemporary Taiwan Lungchih CHANG II HISTORY WRITING IN SCHOOL TEXTBOOKS: PRACTICAL CONSIDERATIONS  6 New curriculum reform and history textbook compilation in contemporary China LI Fan  7 The ‘others’ in Chinese history textbooks: with a focus on the relationship between China and Japan SU Zhiliang  8 Rewriting history in a textbook in contemporary Japan MIYAKE Akimasa  III SELF-ASSERTION, REVISIONISM AND HISTORICAL RECONCILIATION: CONFLICTS AND PERSPECTIVES  9 The ‘Tokyo Trial view of history’ and its revision in contemporary Japan / East Asia Steffi RICHTER  10 History conflicts and dialogues between Korea and Japan: with a focus on the curreNt issue concerning Japanese history textbooks CHUNG Jae-jeong  11 Historical reconciliation between Germany and Poland as seen from a Japanese perspective: the thoughts of a Japanese historian and their development KAWATE Keiichi  12 Mediating textbook conflicts Falk PINGEL  Concluding remarks Gotelind MÜLLER

Gotelind Müller is Professor of Chinese Studies at the University of Heidelberg, Germany.

"This book makes an important contribution to the on-going multi- and transnational research into history education and the politics of history in East Asia by combining a refined approach to this critical topic with an up-to-date overview of the seminal issues in the field." - Torsten Weber; Monumenta Serica 59 (2011)

"This edited volume gives an excellent overview on the present state of schoolbook discussions in East Asia from a national and multilateral perspective; at the same time, it presents multiple ways of solving the problem of how to revise traditional narratives in school textbooks, e.g. by a transnational perspective, to further historical reconciliation via history education." - Eckhardt Fuchs, Vice director of the Georg Eckert Institute for Textbook Studies, Braunschweig; Geschichte heute (2012).

"The volume remedies an important lacuna for historians, textbook scholars, political scientists and all those interested in pursuing the goal of deescalating historical textbook didactics, and those concerned with potentials of conflict in the realm of educational materials." - Ylva Monschein, Chinese Studies, University of Munich; Asien (2012).

"In this book which incorporates contributions not only from scholars but also from people involved in textbook writing and curriculum reform, the role of History Education in the process of political socialization all over East Asia is discussed from a historical perspective... Different from a mere collection of academic papers, this book is very thorough in its overall structure and will serve as basic reference for studies of history consciousness and history textbook problems in East Asia."- Prof. SHIBA Nobuhiro, Tokyo University; Rekishigaku kenkyû (2012).

"This engaging volume consists of a collection of essays examining official attempts within East Asia to shape national identity against significant European or Asian ‘others’ in school textbooks and related media, and discusses recent transnational textbook initiatives in the region as an alternative approach to traditional textbook design... this book makes a significant contribution to our understanding of the role of education in official and semi-official efforts to shape notions of identity and contributes to the growing literature on transnational textbook collaboration in East Asia. This well-structured volume succeeds in shedding new light on East Asian textbook controversies frequently associated with Japanese right-wing revisionism, by placing these revisionist efforts within a broader historical context, by examining textbook narratives in East Asian countries other than Japan and by drawing attention to the emergence of transnational textbook initiatives in East Asia. This book will be of special interest to scholars and students concerned with curriculum development, history education and education in Asia in general." - Khatera Khamsi, Institute of Education, University of London; Compare: A Journal of Comparative and International Education, 43:3, 412-415

'Designing History in East Asian textbooks is an interesting and informative work on several accounts. Contrary to what the title might suggest, the papers presented do not restrict themselves to school and history textbooks.'- Yves Russell; China Perspectives [Online], 2013