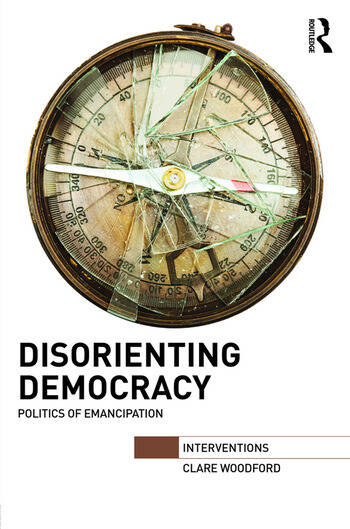 Drawing on recent developments in continental political thought ‘Disorienting Democracy’ rethinks democracy as a practice that can be used to counter the increasing poverty, inequality and insecurity that mark our contemporary era. In answer to concerns that the contemporary left is not strong enough for these so-called times of crisis this book argues that the left must urgently return to strongly redistributive policies but that this alone is not enough. To bring lasting change it must continually work to untangle its longstanding emancipatory ideals from the dominatory tendencies that have undermined and weakened it throughout the 20th century.

In response, this book argues that the work of Jacques Rancière is key. Countering domination with a resolute assertion of the capacities of all he gives us a radical politics of emancipation that emerges through subjects who refuse to know their place. In appropriating alternative ways of living they disidentify with everyday consensus, rupturing and subverting our unequal order to force alternatives onto the agenda. Juxtaposing Rancière with other thinkers from Judith Butler to Jacques Derrida, Woodford draws out the practical  implications of Rancière’s work for our current time. She develops dissensual practices that provoke us to not just assert that another world is possible, but to bring about that other world today.

Challenging what it means to do political philosophy, rethinking the role of critical theory, ethics, education, literature and aesthetics for democracy, and rejecting the longstanding divide between theory and activism, this book will be of particular interest to graduates, scholars and activists.

Disorienting the left and the limits of communism

Rejecting postdemocracy and rethinking the state of the left

Dis-reconnaissance in preparation for voyage

1. Equality: the twisted path of emancipation

‘Politics’ as appropriation, subjectivation and dis-identification

‘Politics’ can be willed

The ordinary in the extraordinary: how to decide between ‘politics’ or police

Strategy: from police to ‘politics

Domination and emancipation in critical theory

Distinguishing domination via the aesthetics of knowledge

Christoph Menke and critical thinking as a practice of reflexivity

Provoking the self through aversivity

4. Poeticity: from the glade of the cicadas to the island of the people

Poeticity as play with meaning

From theatre to the streets

Subversion as iteration in the work of Judith Butler

Reading Butler and Rancière together

Reflections on revolutionising: a voyage without a compass

Clare Woodford is Senior Lecturer in Political Philosophy at the School of Humanities, University of Brighton, UK